A woman lured a group of deer into her living room. Wildlife officials said she risked the animals' lives 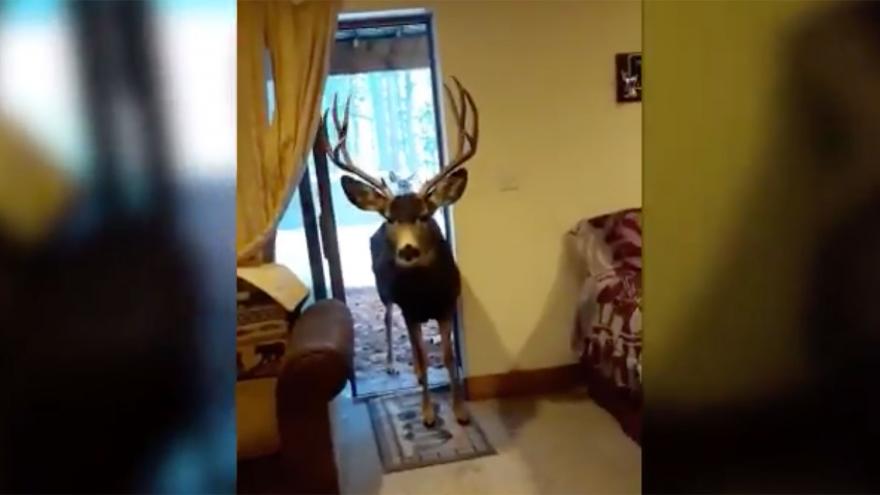 (CNN) -- It's hard to resist deer: The gangly, doe-eyed and endearingly skittish are a welcome delight in backyards. But the most respectful way to admire deer, according to wildlife officials, is to leave them alone.

So says the Colorado Parks and Wildlife's Northeast Region, which fined a woman $550 for luring and feeding three deer in her living room.

"These acts of feeding wildlife need to stop," the department said when it shared footage of the feedings. "Let wildlife be wild; these animals are not pets."

The video of the incident shows Evergreen resident Lori Dixon calling three deer by pet names and leading them into her home through an open sliding glass door.

That's where she laid out sliced bananas, a halved apple, bread pieces and carrot sticks on a table for them.

Dixon told CNN affiliate KDVR she was a veterinary technician for several years and has frequently worked with animals. "If something comes to me and needs my help, I'm going to help it," she said. "That's just who I am."

But it's illegal to feed deer and several other species in Colorado. So Parks and Wildlife fined Dixon $550 for unlawful feeding, a department spokesperson told KDVR.

Deer move closer to homes and businesses during the winter.

People who see them may fear they're coming closer because they need food -- but in most cases, they're able to obtain their food naturally.

In the rare case that a substantial amount of Colorado deer can't find their own food in extreme winters, the department launches emergency feeding initiatives. So it's more than likely that deer don't need to be fed by adoring humans.

Why is feeding wild animals dangerous? Let us count the ways

Leaving out food for a few friendly deer can be seriously dangerous for both the animals and humans, according to Colorado Parks and Wildlife.

It's not just the deer -- it's also what may follow them there.

Deer are the prime prey of mountain lions -- and if deer learn to stick around residential areas because they know they'll be fed, they could attract big cats to homes and businesses, too.

Food can also send the wrong message to other major predators, specifically black bears. If they frequently sniff out food for deer in backyards, they'll learn to expect it there.

The bolder bears and mountain lions feel in human territory, the more likely they are to attack humans or pets. And when they show aggression or get too close to people, they're often euthanized.