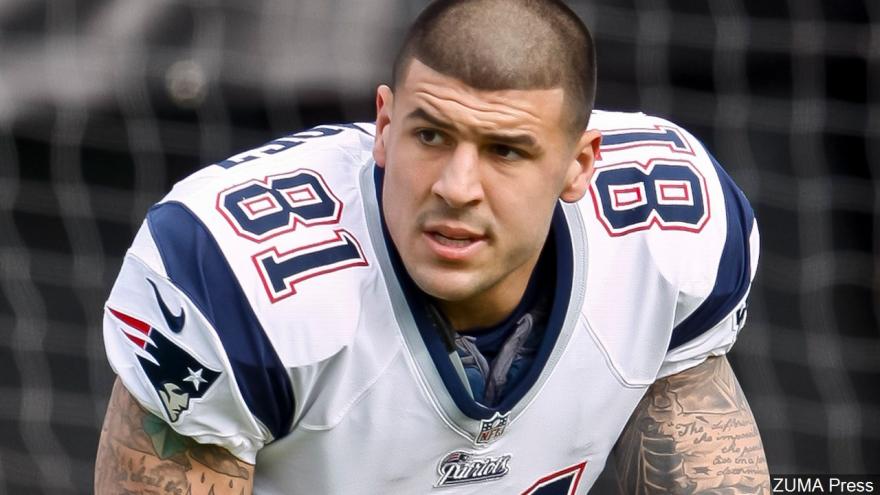 McKee and her team have examined more than 100 former NFL players' brains for the neurodegenerative disease, formally named chronic traumatic encephalopathy, and found Hernandez's case to be significant.

"This is the first case that we've seen that kind of damage in such a young individual," she said, adding that the type of brain damage observed is usually seen in someone 20 years older.

Hernandez was 27 years old when he fatally hanged himself in prison in April. He was found to have had stage 3 CTE; stage 4 is the most severe.

McKee was careful to state that she couldn't make a connection between his pathology (seen in the lab) and his behavior. "We can't connect the dots," she said. But she pointed out that the parts of his brain mostaffected by the disease included areas that controlled memory, judgment and emotion.

"Everyplace we looked, it was classic CTE," McKee said of Hernandez's brain.

CTE can be diagnosed only after death. It's believed to result from repeated head trauma. In football, this can happen not just from hard hits to the head that result in concussion but from the repeated rattling of the brain inside the skull that occurs during tackles and falls to the turf. These repeated hits are known as subconcussive hits and can result in a buildup of a kind of protein called tau in the brain.

There is no treatment or cure for the disease.

McKee and her team focused only on the diagnosis, choosing not to look at Hernandez's clinical history or speak to his family.

She said that his brain was one of the best and most intact specimens her team had ever handled and that she believed it would contribute greatly to the overall understanding of the disease. "This will really advance and accelerate research going forward."

Researchers still aren't clear why some people may develop this disease while others do not.

In Hernandez's case, McKee pointed out that tests revealed a variant of the APOE gene, which has been associated with higher risk for Alzheimer's and other neurodegenerative diseases. Whether it played a role in the severity of Hernandez's CTE is unclear. However, "this is substantial damage that took years to develop ... not something that developed acutely," she said.

His family is pursuing a lawsuit against the NFL, alleging that it knew about and hid the dangers of head trauma. "The NFL had made certain representations to players during this time that Aaron was playing (2010 to 2012), and those representations turned out to be false," family attorney Jose Baez said in September.

The NFL has said it will contest the claim vigorously.

CTE has been detected in military veterans, as well as players of other contact sports; however, it has become most associated with football. It has been diagnosed in San Diego Charger and Hall of Famer Junior Seau, as well as the Philadelphia Eagles' Kevin Turner and the Oakland Raiders' Ken Stabler.