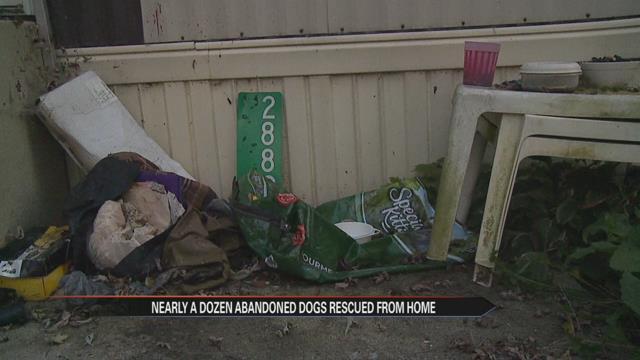 The animals are now being cared for at the Elkhart County Humane Society. They could not comment on their condition.

Neighbors, who did not want to be identified, alerted authorities to the situation.

They say that nightly howling could be heard coming from the house.

They soon realized the owners had taken off and left almost a dozen cats and dogs behind.

The neighbors were compelled to help.

“They’re just like your babies. I can’t have kids so animals are my next thing.”

They fed the animals through a window at the back of the house.

“I’m not going to allow an animal to starve. I know what I did was right, it’s between me and God.”

On Friday they called the Elkhart County Humane Society and the Elkhart Police to try and get the animals removed from the home.

On Wednesday afternoon the neighbors watched as the animals were removed from the home.

Although the ordeal has been heartbreaking for them, they say knowing the animals are being taken care of now makes it all worth it.

“Call and do something about it, if you get in trouble it’s well worth it.”