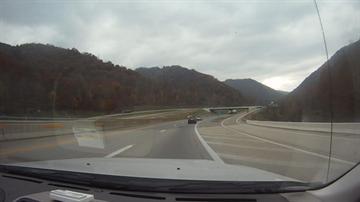 WINSTON-SALEM, N.C.  – ABC 57 packed up the car and hit the road on Friday to drive to Wake Forest University. After some 650 miles and 12 hours in a car, crews arrived on campus just as the excitement was building for Saturday night’s Notre Dame vs. Wake Forest game.

We weren’t the only ones who used Friday to travel. Mark Trowbridge lives in Atlanta, but grew-up in South Bend. He said he jumped at the chance to watch the Fighting Irish closer to his new home.

“It’s closer than South Bend, about half the distance, and when I saw they were playing Wake Forest I said we got to go,” said Trowbridge.
Trowbridge was walking on campus with his family Friday night, as the official Wake Forest Pep Rally was about to begin.
“First time, we’ve ever been here to this part of the country, so it’s great. It’s a beautiful campus. We’re looking forward to it,” said Trowbridge.
Friday’s Wake Forest Pep Rally was a rare opportunity for Demon Deacon Fans. People said they don’t normally have pep rallies, but this weekend is a big game because of one reason, their opponent.
“Very simple it’s Notre Dame. We don’t really have too many pep rallies, but in this particular case, we have a lot one for the people here to get hyped up to beat Notre Dame,” said Wake Forest Parking Attendant Duffy Smith.
Students at Wake Forest are looking forward to the weekend, too.
“We’re just really looking forward to the game hoping that the Deacons can beat Notre Dame,” said Kaitie Beetner.
Beetner is a Wake Forest Cheerleader and said she just hopes the fans can throw the Fighting Irish off their game.
“I’m hoping our fans can intimidate them, so hopefully, I know Notre Dame has a really good reputation, but I think the Deacs have come a long way since last year,” said Beetner.
The Irish fans said they didn’t travel to Winston-Salem for nothing.
“Don’t tell anyone around here, but I think ND is going to win by three touchdowns. I think they’re going to be on a roll. I think they’re offense is rolling, so little nervous about that prediction, I think they’ll win big,” said Trowbridge.
Saturday’s game starts at 8 p.m. at BB&T Field in Winston-Salem, North Carolina.
You can watch the game on ABC 57, and follow ABC 57 Facebook and Twitter for real-time updates on the road trip.
Share this article: