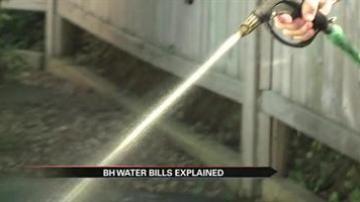 BENTON HARBOR, Mich. -- ABC 57 sat down with Benton Harbor’s financial director, Jody Lundquist, to dig deeper into the water rates issue.  Lundquist says the numbers do not lie, the city has bills to pay. In order to keep the water plant running with such a small population, residents have to be charged a lot of money for the water.

When it comes to water bills, many Benton Harbor residents are drowning in debt right now.

City officials say residents are not the only ones struggling to stay afloat.

"I do feel bad when we have the single mothers and they are doing everything they can to keep their kids in school and fed and they have these high water payments, but at the same time the city still has to make its payments.” Lundquist said.

In the past two years, the water rate has gone up by at least fifty percent.

The city says that is because bills have surfaced that were not in the picture before.

A couple years ago, the city of Benton Harbor borrowed money to build a new water plant. Now its time to pay up.

"Two years ago we didn't have to make the bond payments which are now due twice a year on the water plant. We do have to cover the cost of the water plant and water system with a smaller customer base .” explained Lundquist.

Lundquist went over a few water bills in detail.

As it turns out, every month, each household pays at least a $45.00 in fees before they even turn on the water. The numbers only climb from there, and leaking pipes and running toilets only make problems worse.

Lundquist there is a solution to this problem, but it is not a quick fix.

"Until we can develop the city and bring in growth and additional customers there is really no way out."

City officials want to clarify that most water bills are not $600 per month.

However many of them get that high over time because many residents are unable to pay their bill in full each month.

Residents say with bills ranging form $100 to $200 every month it is impossible to get ahead. They pay what they can, but the bills keep adding up.