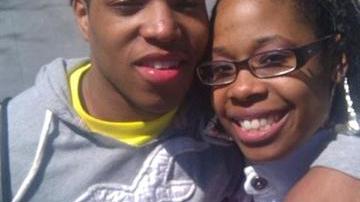 Simirl was shot at least four times to the head. As of early Friday morning no arrests have been made.

Simirl was rushed to Memorial Hospital where he was pronounced dead.

"I just miss him walking through the door," Chris' mom, Renee Reyes said.

Homicide detectives knocked on her door around 8:30 p.m. to tell her that her son had been shot and killed.

"I rushed home and homicide was really at my house telling me our son was dead and he would never be home again," Chris' step-dad, Timothy Reyes recalled.

Family and friends said they will miss his smile and laugh the most, they said it was contagious.

"Chris always, always had a smile that even if he was in trouble you could do nothing but smile back," his aunt, Kisha Harris remembered.

The sadness is almost too much for Chris' younger sister, Ashley Johnson, 11, she cried her way through the interview.

"He has been there and I want him to know I really appreciate him," she said while sobbing uncontrollably.

Ashley was Chris' only sibling. She is a 6th grade student an Jefferson.

The family wants Chris to be remembered for his achievements. He held a 4.0 grade point average at Washington High School where he was a senior, he was previously on the football team, played in the band and was on the track team.

Chris was considering attending Purdue in the fall and wanted to study pharmacy.

Anyone that has information in connection to Chris Simril's murder are asked to call CrimeStoppers.