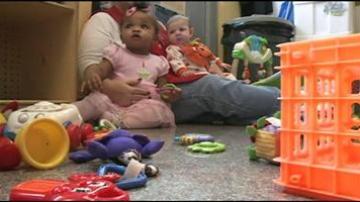 SOUTH BEND, Ind.- If you have kids, you know there is nothing more important than their safety. ABC 57 pulled every inspection report for licensed day cares in St. Joseph and Elkhart counties. What we found surprised us.

There were violations after violations- things like, electrical outlets uncovered in reach of children, scissors, batteries, white out and tools in reach of kids. One report showed a strangulation hazard due to blinds.

We focused our investigation on the 77 licensed centers and ministries, removing home daycares from the equation.

We wanted to focus on those who pride themselves on the business of keeping your kids safe while you're at work.

Stacy Mure is pregnant with her first son. She's due any day.

"Safety for me is huge," Mure said. "The tools, the scissors in reach of children, the contaminated food in the fridge and such, but mostly kids being able to put their hands in the electrical outlets without them being covered."

We went to the day care directors to get answers.

Our investigation focused on:


In each section you will note comments from Shannon Gage. Gage is an expert when it comes to childcare. A previous director with 15-years experience in child safety. Gage is now a consultant with Early Childhood Alliance in Fort Wayne; included in her service area is St. Joseph and Elkhart Counties.

Foundations was cited by Indiana state inspectors for:

"Two children left unsupervised in a bathroom, again, depending on the age of the classroom, unsupervising [sic] children, that is a pretty big concern," Gage said in response to the violation.

8/22/2013 - When consultant walked in the kitchen, the cook was not wearing an apron or a hairnet.

8/22/2013 - In the 3's classroom, there was a cord for the window blinds that was hanging low enough for the children to access it. This is considered a strangulation hazard.

8/22/2013 - No documentation of annual Indiana State Police inspection for 2 buses.

"Was there a strangulation hazard in your facility?" Dorman asked.

"In our opinion, no whatsoever, but in their violation it does state that there is," Jennifer Fisher, Executive Director for Foundations Child Care Center said.

While at Foundations, Dorman noticed, and got video, of dog feces in the child's room where the interview took place.

"I couldn't help but notice, I was here for five minutes and there is dog feces in this room," Dorman said to Fisher.

"I do have an 11-year-old special needs son who does have a small five pound dog that he does spend a lot of time with," Fisher responded.

4/18/2013 - The purpose of the bathroom is for toileting not for sleeping. This is not a sanitary environment for children to sleep in.

The report stated a child was put down for a nap in the bathroom.

"I obviously didn't know that was going on at the time. But the two teachers that were in charge of that class have since been let go and are no longer working for us," Hogsett said.

According to Hogsett, the child, whose name was not disclosed, was not able to sleep around other children. Hogsett said that the staff had permission from the child's parents to set up a cot in the bathroom for the child to sleep. Inspectors raised concerns about the child being unsupervised in the bathroom with a toilet that posed a serious danger.

6/20/2013- A teacher was applying sunscreen to the children and did not wash her hands in between each child.

"As a parent, you don't think about it. You put sunscreen on all of your children, but again, that's your child, in a business you want to make sure you're taking all precautions for anything that could happen," Gage said.

According to owner, Mike Garatoni, a bloody tissue was tossed in the trash.

"When you read it, it sounds horrible," Garatoni said. "A child blew his nose and the child must have had a bloody nose or something, it was a Kleenex and they threw it away in the trash can."

6/18/2013- There was a nurser bag in the infant room containing breast milk that wasn't labeled with the child's name. Very important to have child's name on there so that another child isn't accidentally given the wrong breast milk.

-In the 4/5 room, there were miscellaneous potentially hazardous things in unlocked drawers that were accessible to the children (white out, sharp scissors, batteries, etc.) These items need to be kept out of the reach of children.

3/4/2013- In the 3/4 room, there was an electrical outlet in the bathroom by the sink that was not covered with safety covers.

Director Carol McCrory declined our request for an on camera interview to discuss these safety violations.

"Thanks for providing opportunity to take full responsibility for non-compliances found last spring. We are also glad for an opportunity to talk about our very special program for community children. We are proud of our long record of service. We have countless stories of opportunities to change the direction of young lives through positive interaction and the very best of early education."

Included with the statement is a safety checklist. McCrory told Dorman that the list was typically checked once a month. She assures us that because of our investigation the check-list with be checked by her staff on a daily basis.

6/6/2013 - Several vegetable items were outdated and need to be discarded- Refrigerator shelves and pull out drawers need to be cleaned-Refrigerator door doesn't shut all the way -Several food items being stored in refrigerator that weren't in the original container.

6/6/2013 - There was a small gap between the slide platform and slide chute on the large slide that needs to be closed.

"Nevertheless these outlets should constantly be covered for the safety and well being of the children," Director Nancy Caenepeel told ABC 57's Brian Dorman.

Gage urges parents to do their homework. Check out the daycare facility, in person, seeing the teacher/child interaction first hand- perhaps more than once before enrolling your child into a daycare.

The inspection reports that ABC 57 pulled for our investigation are available to you, for free by clicking this link.

Indiana Family & Social Services Administration is responsible for the information for all child care provider information. As a parent, all you have to do on this site is select your county, city, and zip code. If you simply select county, it will pull up every licensed day care within the county for you to check on previous inspection violations; most dating back at least three years.

Gage said this is a wonderful tool to use and share with others if you are looking for first time daycare or simply want to keep track of the daycare that you currently trust with your child's safety.

*It is important to note, according to Indiana Family and Social Services Administration each of the inspection safety violations listed in ABC 57's investigation have been corrected.