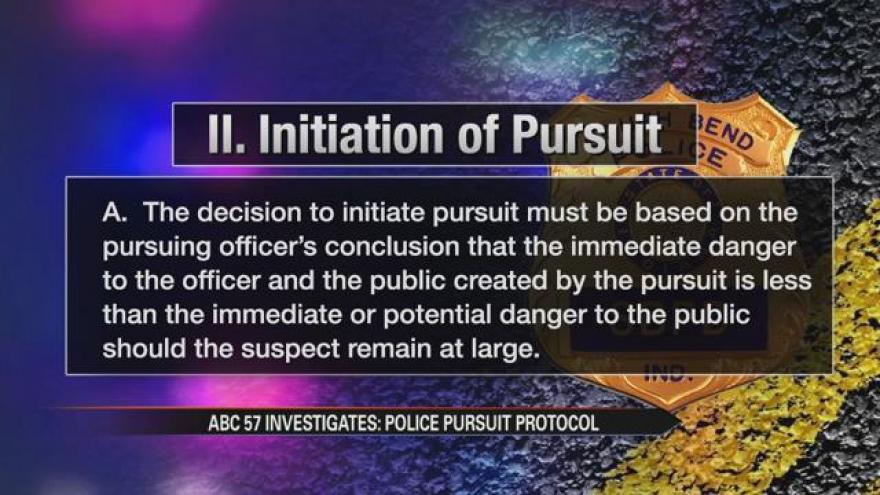 ABC 57 investigates whether or not policy was followed during Tuesday’s police pursuit that led to the fatal crash that killed two teenage brothers.

The following is not an allegation that Officer Nathan Gates did not follow protocol. It is simply a comparison between policy and what we see and hear in the dash cam footage.

Then, he flips the switch to his lights, the sound comes on, and the two and a half minute pursuit begins on Lincoln Way West.

In plain English, that means, would a high speed chase or the suspects getting away be more dangerous to the public?

To make that decision, the officer follows these four guidelines:

We’re focusing on the first two.

The dash cam video shows that it was raining and roads were wet.

However, that alone does not mean the officer should not have started the pursuit.

In terms of traffic, at one moment, we count seven cars lining the sides of the road.

Still, we don’t know if that should have been a red flag.

“Units must terminate a pursuit if the unit has no radio communication with a law enforcement dispatch center.”

From the time the chase starts until Officer Gates finally gets through to dispatch, about 30 seconds passes with seven failed attempts at communicating.

Police say the ‘bong’ sound we hear in the footage means the officer is being blocked by other radio traffic or he is not getting signal.

That happened about 12 times in this chase.

We still are not sure how long officers are supposed to try getting through before calling off the chase.

When Officer Gates did make contact with dispatch, he definitely followed procedure with relaying information, saying “Southbound. 55 miles per hour. No traffic. South through Hamilton.”

From the dash cam footage, we could make out 13 times that Officer Gates got through to dispatch until that fateful moment that ended teenage brothers, Samuel Phillips and Jermaine Fleming’s, lives.

This incident is currently being investigated by a third party.