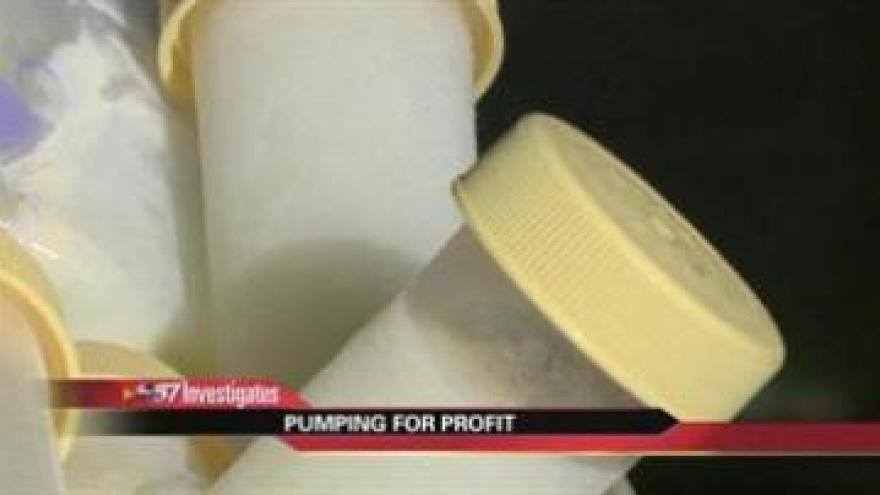 It is an industry that is taking off for new moms around the country: selling their breast milk online to make a few extra bucks. It is perfectly legal but completely unregulated by Indiana State Lawmakers.  This can lead to a dangerous outcome for the baby on the receiving end but ABC 57 found one Indiana mom who is selling her breast milk online and insists it is perfectly safe for whoever purchases it.

Her name is Brandi Lannom. She is a full time student and a mother to three young kids in Gary, Indiana. The youngest is 9-months-old and is still breastfeeding. That is when Brandi got an idea that gave her a new online nickname, “Breastfeeding Brandi.”

“Breast milk is the best, it’s the best thing anybody can have. So why not, why not sell it?” she said.

And she thought, why not sell it on Craigslist.

“I have so much extra. Why not give it to someone who could use it?” said Brandi.

So the pump went on, the ad went up and the replies came flooding in.

That one ad sent Brandi's breast milk from her couch in Gary to coffee cups in Dubai.

“She let me know that she gives it to her son and her husband and puts it in their coffee mug and they drink it with their coffee,”she said.

And Brandi says she does not judge what you do with her breast milk post purchase. She is just happy to be pumping for a pretty profit.

But she says the real reason she does it is to provide for her own growing kids and give them a better life.

“I am living dollar to dollar. I have to think about how much I can spend on toilet paper. I mean, what am I going to do for Christmas? Sell my breast milk!  Why not?” Brandi said.

One reason might be because of a recent study that showed buying breast milk online is not always safe. According to the study, 75 percent of breast milk bought online had some sort of serious bacteria in it.

It served as a breast milk buyer beware.

Brandi insisted hers is clean and safe so ABC57 bought some off hers, froze it and then put it to the test.

We brought a bag of her frozen breast milk to Any Lab Test Now in South Bend to run various screenings on the milk. They tested it for ten different drugs and different bacteria like staphylococcus, E. coli, and salmonella.

“It is scary because you are giving something to your baby that you don't know what is in it,” said lactation specialist at Memorial Hospital Emme Ettl.

Ettl does say that the benefits of breast milk are unparalleled. Beastfed babies have fewer ear infections, respiratory problems and it is even linked to a higher IQ. But the risk of purchasing through a stranger can outweigh those benefits.

“You don't really know what you are getting when you get it on Craigslist,” said Ettl.

So, what do you get on Craigslist?

The lab results show Brandi's breast milk is drug free but it did test positive for trace amounts of the common bacteria, staphylococcus epidermidis. It is a type of staph that when ingested can cause infection, fever, headache and fatigue.

The natural antibodies in breast milk could overtake the staph, but it is why Ettl says milk from a certified milk bank is the best way to go if you buy from a third party.

But the screened and pasteurized milk from a certified human milk bank usually only makes it to high risk babies. That is why Brandi says she will sell hers to whoever wants to buy it, moms who can not produce, bodybuilders, families who want it for their coffee and even people with a breast milk fetish.

She says if you are looking for the real deal, she’s got a freezer full of breast milk that is just a click away from being yours.

“I don't care, I'll sell it to anybody, if you want it I am happy that you want it because I believe everyone should want breast milk,” Brandi said.

After learning that her milk did contain staphylococcus epidermidis, Brandi said it’s a common bacterium that everyone has. She does not believe anyone who drinks her milk has anything to worry about.

She’s also started a Facebook page so anyone who wants to follow her diet, exercise and day to day life can feel like they are buying from a friend, instead of a stranger.

And Ettl says if someone is going to buy breast milk on Craigslist, then they need to do their own research and vetting to make sure the product is safe.

For more information on the Indiana Mother’s Milk Bank you can go to www.immikbank.org