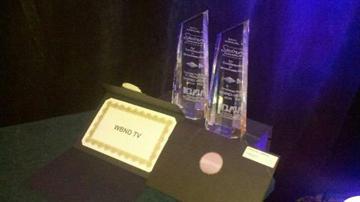 INDIANAPOLIS - WBND-TV was recognized Saturday night by the Indiana Broadcasters Association during the Spectrum Awards Banquet.
ABC 57 News won two awards: Feature/Best use of Technology and Best Sportscast.
The award for Feature/Best use of Technology was in recognition of a piece that ABC 57's Emily Pritchard did on the Tin Goose airplane. Pritchard was live during a newscast from inside the plane with the use of LIVE U backpack technology.
The award for Best Sportscast was in recognition of our team effort in our coverage of Notre Dame Football media day.
ABC 57's News Director Aaron Ramey told the ABC 57 News Team in a company memo after the announcement, "I can't tell you how proud I am of all your hard work which is recognized by our growing number of viewers and your peers."
ABC 57 News launched in the Michiana market in April of this year. Our coverage started with a 6 a.m., 6 p.m. and 11 p.m. broadcast Mon. - Fri. with weekend coverage at 6 p.m. and 11 p.m. In September, we started a 7 p.m. broadcast that also airs weekdays.
Share this article: