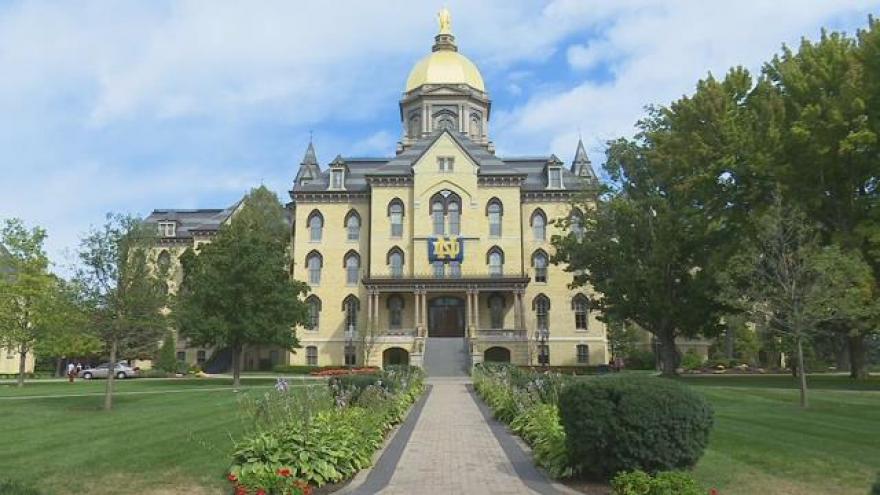 ‘God. Country. Notre Dame.’ It’s a saying steeped in tradition, just like the university it represents.

But Notre Dame is also full of superstitions that students cling to like their diplomas depend on it.

“Two of the biggest superstitions have to do with this quad right here,” said Notre Dame yearbook Editor-in-Chief, Maddisen Brennecke.

So that’s where we started.

I asked the yearbook Editor-in-Chief, Maddisen Brennecke to be our tour guide and dish out the secrets.

The first stop is probably the most iconic building on campus—Notre Dame’s golden glory—the dome.

“So this is the main building steps. I as a student am not allowed to walk up these steps, because if I were to walk up them, then I wouldn’t graduate, so I have to go all around,” said Brennecke.

“This goes back to the 1800s. Exactly how it came into being is hard to say, but it had a little bit to do with what was called porch etiquette and who could smoke and who couldn’t smoke on the porch in the 1800s, and obviously the undergraduates weren’t allowed to, and so that kept them off the steps,” said Notre Dame University spokesman Dennis Brown.

After making sure to avoid ‘the steps’, we set off for a place that most students save for the savior.

“This is God Quad, and when you’re a student here, if you step on this grass before you take this theology course, you are guaranteed to fail your first theology course,” said Brennecke.

Luckily, Maddisen has already passed all her theology courses.

Across campus, love lingers around the arch at Lyons Hall.

“If you kiss underneath the arch, it is said that you will get married to whoever you do,” said Brennecke.

That legend often goes hand-in-hand with this one: a couple walks the figure 8—holding hands--around the lakes on campus, and they’re as good as hitched.

“I was like, oh you want to go for a walk, and we started walking, and I was like, you know what they say about walking around the lakes,” said Arianna Rominski, who recently got engaged to fellow Notre Dame student, Josh Dulany.

“I wasn’t necessarily thinking about it at the time, but when we actually went to go on the walk, I was like ‘oh’ for like a second and thought about it,” said Arianna’s fiancé Josh Dulany.

Less than a year later-- “He asked me to marry him, and I said yes,” said Arianna.

Maybe it’s a self-fulfilling prophecy, but most students choose not to see if the luck of the Irish fails by ignoring a superstition.

“I mean it’s a little silly at first, and you’re like oh okay, but still I would never walk up the main building, and I wouldn’t step on god quad,” said Arianna.

The fact remains that these superstitions weave a connecting thread through Notre Dame’s history.

“They do I think help tie our current generation to the past,” said Notre Dame spokesman Dennis Brown.

“Everyone just kind of rallies behind these superstitions and traditions, because we’ve been here for so many years, and these are traditions that have lasted for decades,” said Brennecke.

“And as time goes forward, we can always remember where we come from and harken back to those days,” said Brown.

“I feel like part of being in the Notre dame community is going with those traditions and understanding those superstitions, and taking them to heart,” said Arianna.

Game day has its own slew of superstitions, so we’ll be bringing those to you during our next ABC 57 kickoff.