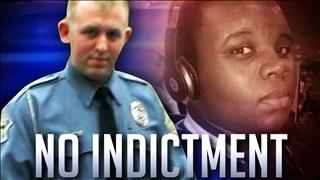 In an ABC News Exclusive with George Stephanopoulos, Ferguson Police Officer Darren Wilson said he would not have done anything differently the day he shot and killed unarmed teenager Michael Brown.

Wilson said the events on August 9th began when Wilson said he encountered Brown and a friend walking in the middle of the street and asked them to move to the sidewalk.

Quickly the situation got tense.

He said words, then punches were exchanged.

Next, he spoke about the critical seconds when witnesses said the teenager stood about 15 feet away from the officer-- arms raised, surrendering to him.

Wilson said that wasn't what happened.

“When he stopped. He turned and faced me. And when he does that he immediately goes into his waist band. And his left hand is in a fist and he starts charging me,” Wilson said.

That is when Officer Wilson shot and killed Brown.

A move that has caused outrage across the nation – for those who don't believe this shooting would have even happened had Michael Brown been white.

In a statement, Brown's relatives said “We are profoundly disappointed that the killer of our child will not face the consequences of his actions.”

Now the Brown family is working to make wearing vest cams mandatory among all police officers.