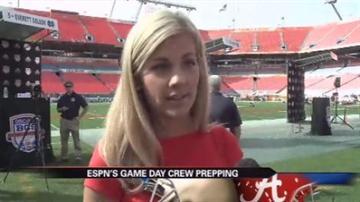 MIAMI BEACH, Fla. — The players are nervous. But EPSN is prepping for Monday's big game.

ESPN's Samantha Steele said the network has had so much time to prepare that the pressure is on. She added that this game definitely felt bigger and more exciting than anything she has seen this season.

And that is saying something since she has spent the past five months traveling around the country to the top game of every weekend.

Steele has been to three Notre Dame games this season with College GameDay and three Alabama games.

She predicts the Irish-Crimson Tide match-up will be a physical, defensive battle.

Both teams have solid, athletic front lines on offense and the defenses are the top two in the country.

But Steele said the tradition of these two programs is what will make this game so interesting.

"I have zero connection to Notre Dame whatsoever, but there's just nothing like Notre Dame," she said. "I mean you look at their ratings on television, how far reaching their fan base is, it's so unique."