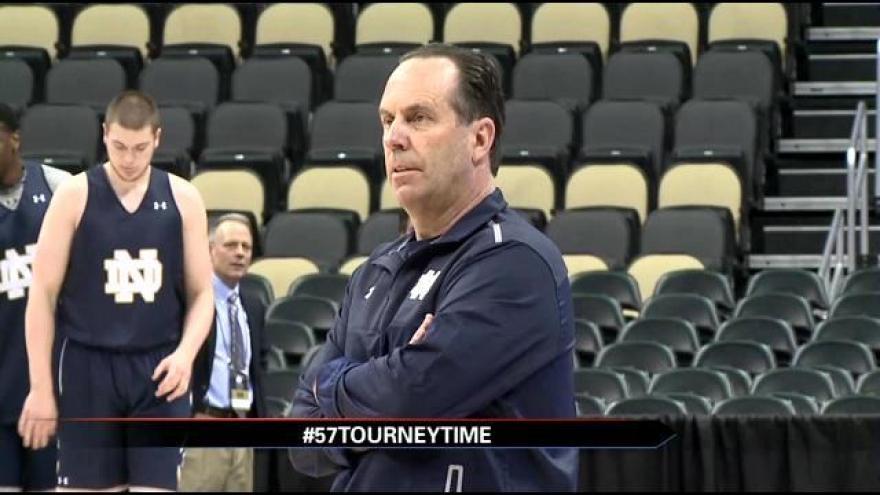 PITTSBURGH, Pa. - Notre Dame men's basketball Coach Mike Brey says missing selection Sunday last year was like missing Christmas. He says the team is excited to be in the NCAA tourney this year.

In their first game of the tourney, Notre Dame will be up against Northeastern.

“We didn't have them as part of our draw up in the Mohegan Sun, and I remember saying to our guys, ‘Glad we didn't draw them!' Well come to find out, we did draw them! I was just really impressed with them,” said Coach Brey.

Coach Brey was impressed with the Northeastern Huskies after watching them defeat the Florida State Seminoles earlier this year.

“We have a lot of respect for Northeastern there's no question about it. I can remember watching and preparing for Florida State, we played a league game before Christmas, and we watched Northeastern beat them,” said Coach Brey.

But will the luck of the Irish stay in Notre Dame's favor?

Northeastern's head basketball Coach Bill Coen says they will have to steal the luck away and play a perfect game.

This is Northeastern's first NCAA tournament appearance in over two decades.

During the Colonial Athletic Association Tournament, they hit over 55 percent of shots from the three point territory.

“We play a heck of a basketball team, a league I'm very familiar with, when I was coaching at Delaware I ran into Northeastern a bunch. I have a lot of stuff for Bill Coen their coach, and how they play especially on the offense,” said Coach Brey.