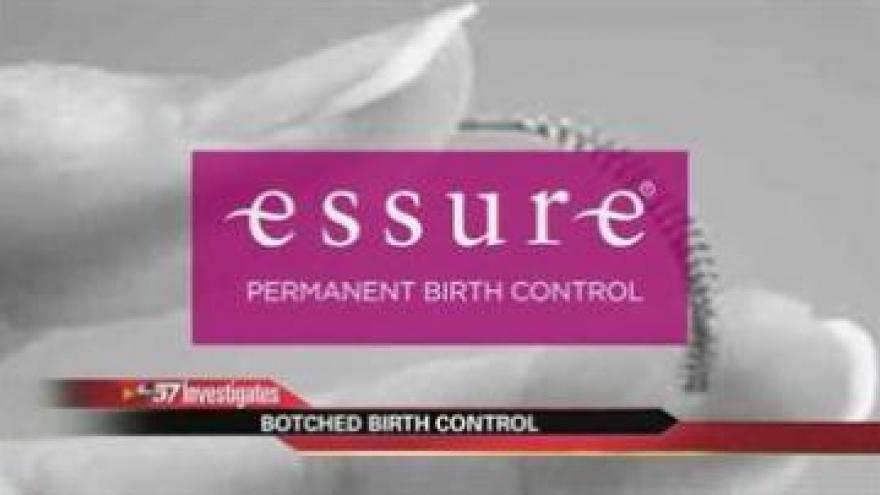 A growing number of women are speaking out against a relatively new form of permanent birth control called Essure. The tiny device allows women to forgo tubal ligation, but the two Indiana women ABC 57 spoke with said it ruined their health, their finances, and their bodies.

Now they are part of a growing online campaign that is gotten the attention of the FDA and the company that owns Essure, and their mission is for all women considering permanent birth control to know what they have been through before getting device implanted.

“My husband and I had three children, I had terrible, terrible pregnancies,” Long recalled.

To avoid any more pain, complications or financial burdens she decided to try a new form of permanent birth control called Essure.

“We love our children but we decided the Essure would be a permanent way to fix me,” Long said.

Long is one of 750,000 women sold on the simplicity of the device and the procedure.

“We thought hey, for $50 deductible and no down time, hey why not?” she said.

Here's how it works: Essure is a tiny spring coil inserted into both fallopian tubes and within three months tissue grows around the metal piece, blocking the eggs from being released.

“They made it sound like this miracle thing,” said Long.

But within weeks Long says that miracle birth control turned into a real life nightmare.

“I felt like I was going to die, I felt like death. My husband took me to the ER five times in three days,” she said.

Over the next nine months she says the pain got worse and the medical bills quickly piled up from $1800 to $8000.

“It's been a tremendous financial burden on my entire family,” said Long.

Long says she's sure Essure was the problem.

“I had this deep, deep pain in my abdomen just two to three weeks after placement, anyone in their right mind would think this all started when this device was put into my body,” said Long.

Her doctors didn't buy it and she couldn't prove it. She felt alone in her fight against Essure, that is until she logged onto Facebook.

“It was a big epiphany for me, I felt like I was alone and like I wasn't the only person when I found them,” said Long.

There are now 5600 members of the ‘Essure Problems’ page. They share symptoms and similar pictures like abdominal bloating or going so-called ‘E-free’ after surgery to get the coils removed.

One of them is Tammy Sexton is from Syracuse.

“I was in shock when I read their symptoms,” said Sexton.

Both women shared the same agony.

“Chronic pain, join pain, pain and not being able to get out bed, kidney problems, and heart problems," said Long.

Similar symptoms and they both ultimately share the same ending, getting Essure removed along with their reproductive organs. The same surgical procedure the device is designed to avoid.

“I had to have my insides removed and make the decision to live or die,” said Long.

“I lost my reproductive organs and I shouldn't have to at 34 years old,” said Sexton.

And their stories are unfortunately not unique.

On the FDA’s adverse affects page, or MAUDE, a quick search of Essure shows almost 1000 negative reports on the device.

The device itself is no bigger than a quarter but an OB GYN tells us even something this small, if not implanted correctly, could cause big problems for the patient who is getting it.

“It's a great idea and a great theory but you can run into problems if you don't get proper placement, 3-15 coils out in the uterus then you didn't really do your job,” said Dr. Cedric Walls with the South Bend Clinic.

Dr. Walls does believe that Essure is a safe device, but only for the right patient.

“It's not a large device but if placed incorrectly it could cause a lot of problems,” Dr. Walls said.

The company who owns Essure, Bayer seemed prepared for questions about the product. They had a pre-produced video response ready to send us when ABC 57 questioned them about the backlash the product is facing.

“At Bayer we care about patients and take the safety of our products very seriously. We are saddened to hear of any patient who has been harmed by any one of our products. Regardless of the cause choosing a method of contraception is a very personal decision that should be made between a woman and her healthcare provider. The healthcare provider should discuss the options as well as the benefits and risks for the most appropriate one for her particular stage of life and for her needs. Essure is one of the most effective contraceptives and has been on the market for over 10 years. To date approximately 750,000 women worldwide have used Essure. The procedure can be performed in a physician’s office without general anesthesia which may make it an attractive option for some women. We encourage women to speak with their healthcare provider and actively discuss the contraceptive options available to them,” said Edio Zampaglione, Vice President Women’s Healthcare, US Medical Affairs.

Bayer insists stories like Long and Sexton's are not the norm and that thousands of women have a positive experience with Essure.

In 2002 Essure was introduced with FDA Pre Market Approval, meaning women with a bad experience can't sue Bayer for any complications. But both of these Indiana moms say they are not on a quest for money.

“It ruined my life,” Sexton said.

Their new goal is much bigger than that, it's fighting to keep Essure from potentially ruining one more.

“We are marching against the whole medical field it seems and telling them this has happened to us, this is real,” said Long.

“We want them off the market. I think eventually it will,” said Sexton.

Because of the growing number of complaints the FDA did another study on Essure last fall.

They did say there is evidence of complications, but they didn't find any new safety problems.

But that's not good enough for those 5000 women on Facebook. They've gotten the attention of Erin Brokovich who is working to get that pre-market approval removed from the device so that patients can seek compensation for any issues they’ve had.

The administrators of that page are having a phone conference with the FDA next week, and they are flying to Germany to speak at the Bayer stockholders seminar.