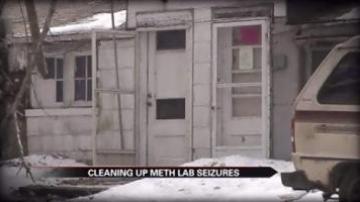 ELKHART COUNTY, Ind. -- Since 2008, there have been 425 meth labs dismantled in Elkhart County. What are Elkhart and Goshen doing to make sure homes involved are cleaned up?

The cities of Goshen and Elkhart are looking to be more aggressive this year.

For instance, Goshen is using an ordinance to make owners not only clean-up the outside of their properties, but the inside as well.

There are currently 31 identified meth homes scattered across Elkhart County and each one has its own story.

"We expect the property owners to take care of the problem," said Mark Brinson, Goshen Department of Community Development.

Goshen is testing its neighborhood preservation ordinance that forces owners to clean-up their property if it poses a risk to residents living nearby.

One homeowner has 90 days to show he's making repairs and working to decontaminate two properties. If not, the city of Goshen will take him to court.

They hope owners will cooperate before it gets to court.

"Hopefully, we won't have to go that far, but we're prepared to go as far as we can to get these properties cleaned up," said Brinson.

The city of Elkhart has more than twice as many homes on the condemned list than Goshen.

Dennis Correll, Elkhart Building Commissioner, does his best to hold property owners accountable, but the ensuing legal and demolition process can get expensive.

"The process is so long and lengthy that we have other things that crop up - we use that funding for. Our unsafe building fund is limited," said Correll.

In most cases, he places a lien on the property which forces the owner to repay the expenses to clean it up before they can sell the property to someone else.

In Indiana, $75 million was recently set aside to clean up blighted homes.

Officials say some of that money could be used to clean up former meth labs, but it's unclear how much cities like Goshen and Elkhart could receive.