ABC57 Investigates: Crime through the eyes of children 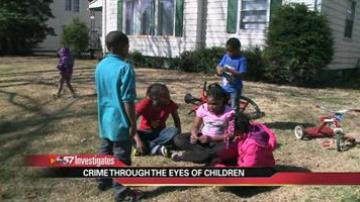 SOUTH BEND, Ind. -- So far this year there have been 30 shootings in the city of South Bend. Six of those were fatal. What is it like to grow up in the heart of the violence. We spoke to a few children to find out.

These four kids are growing up surrounded by violence. They see it all the time on the streets of South Bend - streets where they play.

"I've seen people losing a fight and pull out a gun and start shooting," said Ashunti.

Ashunti has grown up on South Bend's west side where there have been several deadly shootings.

The most recent was on Johnson Street in March.

ABC57's Brian Dorman: That shooting on Johnson Street, did you see it or hear anything that day?

Ashunti: I heard it, I saw police cars and I came outside and people said there was a shooting.

Ashunti worries about her four younger brothers and sisters when they want to play outside.

Dorman asked 10-year-old Tamora if she is ever afraid to be outside playing with friends.

"Kids is dying. It's just really hard on the families," said Agnew.

Agnew is raising 7 kids ranging in age from 4 months to 19-years-old.

She would like to see her kids get out.

"Go to school, graduate and get out of town. It's just too hard here in South Bend," said Agnew.

Dorman: You ever thought about moving?

Agnew: Yes, I really think we should move out of town.

Moving is something many families here wish they could do.

Dorman: If your home would sell tomorrow, would you move?

Michael Cossey: I'd be gone.

"I said, 'We're not living here.' We tried selling our home 2-3 times. It sat on the market for a year and no one looked at it," said Michael.

All the while his daughters confront the violence almost every day.

"I hear them yelling and screaming and cussing and they just say bad words and it makes me scared," said Madysen Cossey.

She says she and her sister are scared to be outside riding their bikes or bouncing balls on the sidewalk.

"They will come up to me and say, 'Dad can you come outside and watch us ride our bikes?" said Michael.

At such a young age, they are aware of the violence.

With the innocence of a child, their solution to the problem is simple.

"I think they should just close their eyes and forget about everything that happened and just count to 10," said Madysen.