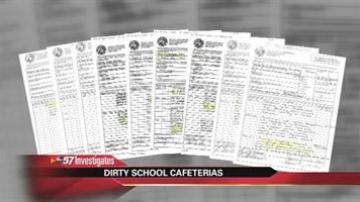 SOUTH BEND, Ind. -- Schools across Michiana are responsible for feeding thousands of students everyday for at least one meal. When kids line up and load up their lunch trays how clean and safe are the kitchens? We pulled inspections from St. Joseph and Starke counties at random to see what inspectors found.

In Starke County, three cafeterias were recently cited for having old, peeling paint in the dishwashing area.

At Knox High School, paint was found peeling on the ceiling where an inspector wrote it could potentially fall into students' food.

"It absolutely is a concern for it to fall into the food. That is why it is wrote up like that. At the same time they are proactive as far as we're not giant sections of paint just hanging from the ceiling," said Frank Lynch of the Starke County Health Department.

And in March of 2013, at Oregon Davis Elementary inspectors spotted something dangerous behind that peeling paint - possible black mold growing near the kitchen sink.

"As far as this situation, yes it needs to be addressed. However is it a health hazard and kids are going to get sick at school? They have not," said Lynch.

In September another inspection showed that potential hazard had been addressed and the only thing inspectors found was dust build up over a fan. The interim Superintendent at Oregon Davis, Greg Briles, later added that, “I stand by my kitchen staff, who keep an excellent food prep and storage area.”

In some South Bend schools, they're dealing with pesky pests.

They found mouse droppings in the dry stock, shelving and employee restroom at LaSalle Intermediate.

At Adams High School, there were three different inspections within three years where mouse droppings were found inside the cafeteria. We wanted to know why they haven't gotten a handle on the problem.

"Not to place blame on budgets and stuff but when you start losing operational staff and guys are taxed with bigger areas to clean they look for ways to cut corners," said Steve Miskin, SBSC Director of Buildings.

Rodent feces and urine can spread salmonella, bacteria and other dangerous diseases.

School officials say they've already made changes to the cleaning procedure at Adams after those droppings were found on the shelving, in dry food storage, the stock area and baseboards.

"We can pretty much tell by the droppings if it's one or two or if it's a herd so to speak," said Victoria Moore, SBSC Director of Food and Nutrition. "I don't know if it was 1 or 2. At this point we seem to have it under control and contained."

If a mouse leaves a trail in the kitchen again, some say they want to know about it.

Miskin says his crews know about these inspections and are working to make sure repeat rodents aren't ever found at Adams again.

"It reiterates the fact that we have to be more diligent in the job that we do and providing that service of a clean, well lit environment to South Bend Schools that we represent," said Miskin.

School officials say they do work with outside pest control companies but it's not always as simple as spraying for them as soon as they are spotted.

They have to limit the chemical exposure in the cafeteria during school hours.

Also since we pulled those reports, inspectors have returned to Adams and it received no violations.

Inspection reports referenced in this story