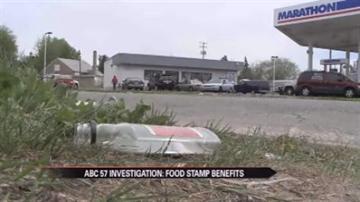 She doesn't own a car, so more often than not, her only choice of food is what's sold in convenience stores.

We went undercover to get a look at what exactly is being marketed at places that accept and advertise to people using EBT. On the shelves, are things like chips, and hot dogs.

Most people wouldn't consider candy, chips and an energy drink a meal, but if you live in a food desert, sometimes, it's your only choice.

"The market is clearly not doing anything illegal, but they're definitely not doing a service to the community," Karl Nichols, Executive Director of the St. Joseph County Minority Health Coalition, said.

This summer, his organization is confronting this health epidemic head on, accepting EBT themselves, and playing by the same rules as these gas stations are.

"June 15th, we'll have farmers and vendors coming in to sell fruits and vegetables," Nichols said.

His goal is to have a set of community conversations to find out what exactly people want.

In order to provide a solution, Councilman Henry Davis Jr. said the root of the problem has to be addressed first.

The Citgo gas station on Olive Street was recently busted for selling drugs and paraphanelia.

Curious as to why that activity and the EBT abuse was allowed to take place, we confronted a man believed to be associated with the store.

He refused to answer our questions and walked off quickly.

In the next coming weeks, that won't be an option, because the City Council will look into the store's licensing codes.

"We need to change the paradigm here in South Bend, Indiana," Davis Jr. said. "And make sure people are not just surviving, but that they're thriving, and that they're healthy."