SOUTH BEND, IND. -- There's an increasing chorus, calls for the end of gun violence are reverberating across America, especially in the wake of multiple mass shootings.

But are those same calls coming from South Bend?

ABC57 Investigates did some digging to find out what’s really going on in South Bend’s high crime neighborhoods.

We started by finding those areas in police data.

“It happens daily, especially once it starts getting warm,” one woman told us when we asked about hearing gunshots in her neighborhood. “It’s crazy over here. Sometimes it’s hourly.”

We spoke to South Bend Police Chief Scott Ruszkowski about the number of shots fired calls his department receives.

“There is no such thing as ‘I guess it’s okay' when a bullet leaves the barrel of a gun,” Chief Ruszkowski said.

We also spoke with leaders in city government.

“It says everything west of the [St. Joseph] river is pretty bad is what it says,” District 2 Councilman Henry Davis Jr. said when he saw our data and original map.

“We do need community heroes to step up and give information,” Mayor James Mueller added during our interview.

Welcome to South Bend, a version you may not have seen before. 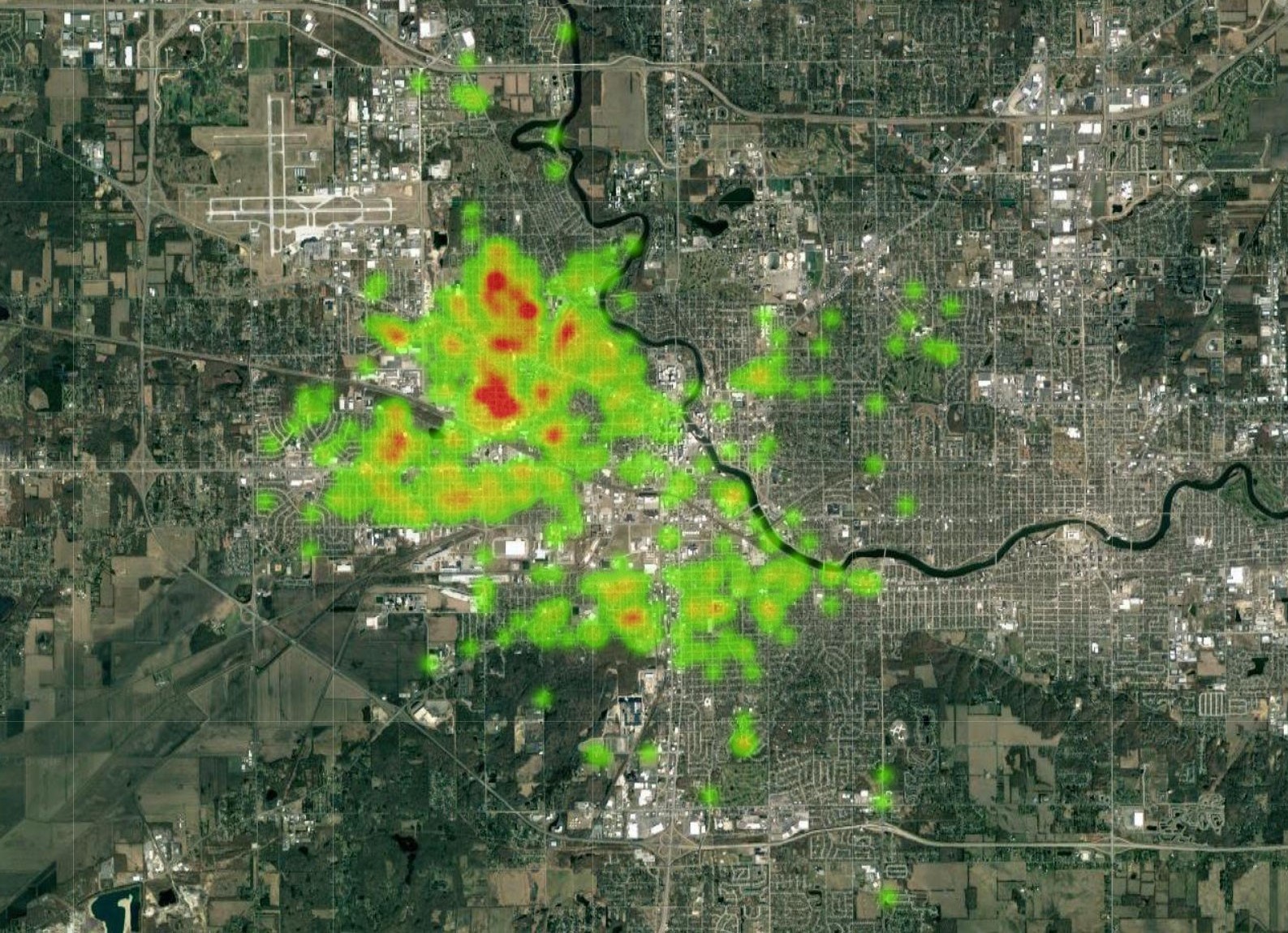 See below for full list of shots fired calls from our public records requests and data points on our Google Map link.

“As a disclaimer some people will call when it could be fireworks, a car backfiring, somebody dropping a pallet from a warehouse, things of that nature and we would rather have that, we would rather have people call in even when they’re not sure,” Chief Ruszkowski said.

ABC57 Investigates obtained data through a public records request and created our very own heat map of all the shots fired calls in South Bend in 2021. While the list shows dates, times, and addresses, that doesn’t mean police actually found evidence of shots fired on these blocks.

So, after combing through the data, we went to the block with the most shots fired calls. In 2021, there were 34 separate instances of shots fired calls on Huey Street, from the 400 block to the 1600 block, so we walked up and down to talk to residents about they’ve heard and seen.

Some didn’t want to talk and cited fear of retaliation as a reason. Some said that hadn’t seen a reporter in this neighborhood in years. Most refused to talk on camera, or talk period, except for one woman.

“I’ve literally been sitting here on my steps and my friend almost got shot in the head because the bullet went into the house next door,” she told us.

This woman, who was the only person out of the dozens we spoke to who agreed to talk to us on camera, asked to have her face blurred. She’s lived in this Huey Street neighborhood for 20 years. She blamed landlords for turning her once quiet block into a tiring nightmare and said she’s moving out.

“There was one woman who got hit in the head with a damn stray bullet or meant for her, I don’t know, and then her damn family was walking up and down the street with damn assault rifles,” she told us.

But this woman, like so many others I spoke to, won’t call police.

“Why would I? It won’t do any good because they’re just going to run through here quick because the police don’t want to be over here either,” she said.

Councilman Davis Jr., a lifelong resident of the city, said that’s not the only reason his constituents and friends don’t call the cops.

We gave Mayor James Mueller and Chief Scott Ruszkowski our heat map. Neither were surprised by the locations the calls were mostly coming from.

“It’s not surprising given the individuals we know and affiliations we know who are responsible for the vast majority of the violence,” Mayor Mueller said. “That’s where they live.”

“Evidence has been recovered primarily from your red and your yellow areas you have on the map,” Ruszkowski added.

We also showed the map to Councilman Davis Jr. He said it proves there’s been a lack of resources west of the St. Joseph River.

“Obviously this is an illustration of why it deserves investment and support from the local government,” Davis Jr. said.

The Councilman added, the northwest corner by the South Bend International Airport, had the highest foreclosure rate during the 2008 recession.

Now, it’s become the most violent.

ABC57 Investigates went back out several times to survey those neighborhoods and upon closer look, we found something alarming.

Up and down the 1300 block of Huey many of the houses on both sides of the street have bullet holes in them. In some cases, they’ve peppered the house more than one time. In one house, we saw as many as seven. And then one owner showed bullet holes that go back two years. One was a .45 caliber slug he had to dig out.

And it wasn’t just the 1300 block either. As we drove up and down Huey Street along the red areas of our heat map, we saw even more bullet holes.

Mayor Mueller told us his office is committed to stopping the violence, but getting there is about more than just investing in the west side of the city.

“You know, a lot of the things we’re doing both long term and short term are designed to have opportunity and safe neighborhoods across the city, so that’s the commitment – how to get there – you know, we do need the community to work with us on this,” the Mayor said. “As we’ve talked about, the community knows who is responsible for a lot of this violence.”

And Chief Ruszkowski had a message for residents, like the woman on Huey, who don’t want to talk to officers.

“Talk to someone who will,” Ruszkowski explained. “We don’t have to have a name.”

But the woman told us police presence makes all the difference and the time of day is especially important.

“If they’re going to come out and sit in this neighborhood and tell us it’s a high crime area, then sit out here when stuff is going on,” she said. “Don’t bring your police cars and sit in the damn parking lot across the street from me and sit there from 7 a.m. to 3:30 in the afternoon because the hood is asleep at 7 to 3:30. The hood don’t wake up until 5, 6 o’clock in the evening and they don’t quit shooting and acting a damn fool until 5 o’clock in the damn morning. Come at those times. Don’t sit there when ain’t sh-t goin on. You ain’t solving nothing. You’re sitting there wasting all of our time. That’s all you’re doing.”

Chief Ruszkowski said his department does use other data from ShotSpotters to track the most violent neighborhoods.

ShotSpotter, a gun-shot detection system, is a technology that triangulates a position about 10 to 12 feet from where a gun went off. It allows police to get alerts sent straight to their phones, most times, before a shots fired call even comes in to dispatch.

“Somebody was out in the street firing an AK-47 and the officer turned the corner and he still had the gun in his hand, just got done with the last round he’d fired,” Ruszkowski said.

Residents I spoke with also mentioned seeing and hearing assault rifles fired, something Ruszkowski said he’s not surprised by.

The Chief added, many guns are modified to make them fully automatic to fire even more rounds.

In an ABC57 public records request, we found from 2017 to 2021 the number of guns South Bend Police have taken off the streets has increased every year:

Chief Ruszkowski said a special unit tasked with getting guns off the streets has stepped it up recently but tracking where these guns come from is a pain-staking process.

“Off the street market, they’ll use craigslist, they’ll use Facebook, they’ll use all these other apps to meet up, or just, quite frankly, they’ll meet at a gas station and make the exchange there,” Ruszkowski explained. “You know, here’s $100, here’s a gun.”

In Indiana, buying a gun doesn’t require a receipt or bill of sale.

“We heard some misguided arguments that well, the criminals or violent offenders are not going to follow the permit, they’re going to carry the weapon anyway,” Mueller said. “But that’s the whole point of any law, is you have the law and law enforcement is able to enforce it, so taking that tool away from law enforcement is going to complicate our ability to get violent offenders off the streets.”

But Councilman Davis Jr. said it’s not about the law at all. He explained that these areas with high shots fired calls on our map are not, nor have they ever been, the result of gun legislation.

“It’s better schools, it’s grocery stores in food deserts,” Davis Jr. said. “We have to start investing into our areas to solve these issues.”

But no matter the cause of increased shots fired calls in South Bend, the effects can be traumatic.

Right now, Chief Ruszkowski said some kids in South Bend sleep in the bathtub to be somewhat safe from a stray bullet… just trying to survive.

“Imagine if you had to live like that,” Ruszkowski said. “There are people who are living like that and since it’s not us, I guess it doesn’t affect us. That’s what the mentality seems to be, but it is affecting people.”

It’s a mentality the woman on Huey Street said is alive and well.

And at the end of the day, it’s that deeply rooted belief so many hold onto in South Bend, despite the terror on their block.

In mid-April, the Biden Administration announced new rules to crack down on ghost guns, which are not serialized and often untraceable homemade weapons.

According to the ATF, in 2021, there were 20,000 ghost guns recovered across the country, a ten-fold increase in just six years.

For a full updated list of shots fired calls in South Bend, you can visit this Google Maps link.