ABC57 investigates: How clean is your favorite grocery store? 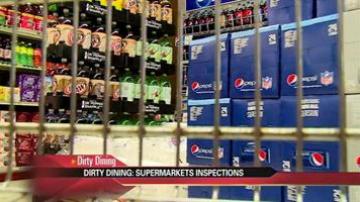 SOUTH BEND, Ind.-- It's a place we all visit, often multiple times a week, but can the food on the shelf at the grocery store make you sick? ABC57 read through grocery store inspections in Saint Joseph and Starke counties.

So if inspectors find things that could make a person sick, customers have no idea.

The average person opens the fridge twenty-two times a day, but the food doesn't start there. Five Star Deli, Ray’s Super Foods and Save a Lot are the three options for shoppers in Starke County, but inspections left some shoppers wishing they could check-out elsewhere.

“I’ve been trying to get a good grocery in our community for the past 15 to 16 years," said Greg Matt, president, Knox City Council.

Shopper Carl Mengedote said he shops at Five Star Deli because of the meat department.

"They do have a union meat cutting department and I’m a union man and I like to support union," said Mengedote.

But I asked him to look at the violations:

1. Fourteen cans of infant formula months past the expiration date

3. No system in place to back track "use by" date for salad packaged from bulk

4. Four containers of potato wedges with no labeling or covering in cooler

"We do like their chicken and I get potato wedges. Unfortunately I did not know that," said Mengedote.

Of the five critical issues, expired baby formula is the most critical, but city council president Matt isn't surprised.

"And that's what I said, you got to check the dates on everything in there,” said Matt.

And workers at the Knox Save a Lot weren't checking the temperatures. The store's manager refused to comment to ABC57 news about these violations:

2. No thermometer in the freezer

3. Cleaning rags and items used for meat packaging stored on the floor

When I asked one shopper if she’d still shop there knowing this information, Fran Bailey responded "probably not, no."

But shoppers 20 minutes away in North Judson say they're happy with their one option in town.

“I haven't ever seen it dirty. They've got constant people in there cleaning and just keeping it sanitary," said Jennifer Keehn, lifelong shopper at Ray's Super Foods.

And apparently it works, since the only thing the inspectors noted at that location was a trapped dead mouse.

"Probably the best secret is we have a good work force,” said Ray Wajda, owner and operator, Ray's Super Foods. “All the employees take the time with the customers and check every single thing. We check all the dates all the time- every single load that we get in."

"There's nothing in our code saying they can't sell that out-dated product if it's still in good condition,” said Hooton. “Except for baby formula. If baby formula is past its expiration date we will pull that because that's a baby's nutrition."

Inspectors pulled three cans of Enfagrow formula seven months past its expiration at Martins on Bittersweet. That Martin's also had critical violations including:

1. Handsinks in the produce area with dark brown and black residue built up

2. Sanitizer solutions used in the deli, meat and seafood area with too much ammonium chloride

Inspectors found expired baby food at the Martin's on Elwood Avenue, Western Avenue and the store in Erskine Plaza.

Inspectors found mouse droppings at the Kroger on Western Avenue.

“I would take my food back to get a refund,” said Dan Habas, shopper.

Lastly, at the Meijer on Grape Road, inspectors found cases of raw chicken stored on top of cases of raw beef. Also, the fried chicken and chicken sandwiches for sale were well under the proper temperature.

"That’s what we depend on for our family for like their safety and how they grow up to be healthy,” said Hoy. “If you can't depend on your local market, who can you depend on?"

But there is a bright side to these critical violations: they don't last long.