PLYMOUTH, Ind. -- Nearly three weeks ago, historic flooding left many parts of Michiana underwater. Since then, you may have heard stories or read articles about flood plains and flood maps.

An ABC57 investigation uncovered some changes made to those maps that have recently impacted several families and it's costing some families big time.

With floods like this one only coming every few decades, flood plains and flood insurance aren't usually at the forefront of our minds. It's so rare that many people simply don't take the time to do the research when making decisions about protecting their property.

The water has receded, but the memories remain. Dried out sandbags now serve as a reminder of the water they just couldn't keep away.

One neighborhood along Pierce Street in Plymouth was hit especially hard.

It's where ABC57 first introduced you to the Hickey family a week after the flood hit. Their home suffered extensive damage.

"As you can see by the sides of the doors and the walls it did get up pretty high," Hickey told ABC57 last month.

The Hickey's we learned were one of a few families whose homes were removed from the flood plain when FEMA re-drew the flood risks maps back in 2011.

In fact, between 2006 and 2015 FEMA re-drew the flood maps for every county in Michiana.

ABC57 reached out to FEMA to find out more about why.

"Flood insurance rate maps are really living documents and as we get better data available to us we will use that data to remap them so they're more accurate and more precise," said McCarthy.

For the Hickey's that meant they were no longer a high risk for floods, so the bank dropped their flood policy.

"We found out through a letter in the mail, the bank sent us a letter saying they re-zoned and we no longer in the floodplain so they took us off our flood insurance," Hickey told ABC57.

ABC57 reached out to First Federal Savings Bank in Rochester where the Hickey's have their home loan to obtain a copy of that letter. The bank declined our request.

So we reached out to several other banks for samples of the letters they use including Old National Bank and J. P. Morgan Chase. Neither responded to our requests.

"We are writing to inform you that flood insurance is no longer required for the above listed property address. As a result, we are going to discontinue your escrow account for flood insurance." 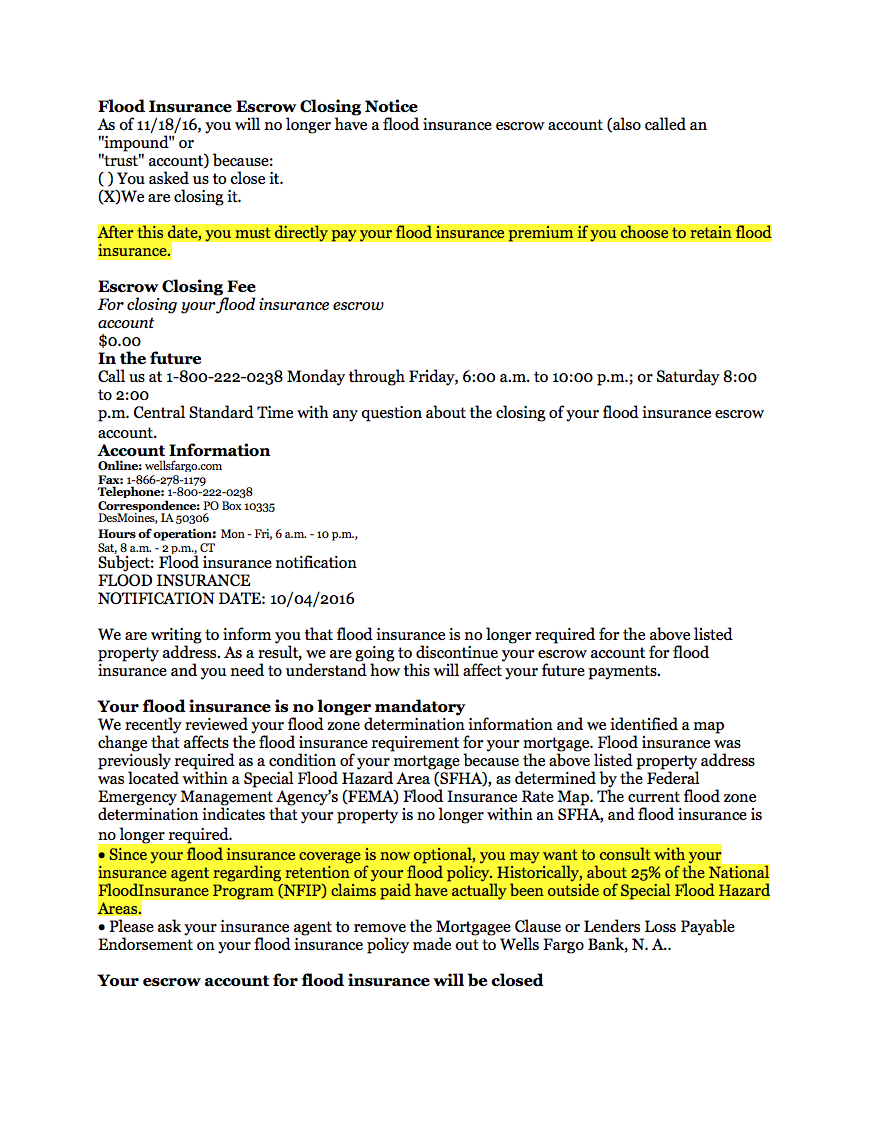 FEMA says despite the wording saying you're "no longer required" -- there is still a risk of flooding even outside the flood plain, but federal law does not require customers to carry flood insurance as part of their mortgages.

"There still is risk outside of these high risk areas," says McCarthy. "Congress has mandated that FEMA on the Flood Insurance Rate Maps identify the 1% annual chance flood zone as the high risk zone, but as we have seen recently in Houston and Louisiana the water doesn't stop at a line on the map and so there is additional risk outside of the 1% annual chance flood zone."

"Since your flood insurance coverage is now optional, you may want to consult with your insurance agent regarding retention of your flood policy. Historically, about 25% of the National Flood Insurance Program (NFIP) claims paid have actually been outside of Special Flood Hazard Areas."

ABC57 spoke with several families in the Hickey's neighborhood who said they were told they could not get flood insurance.

"There are a lot of common misconceptions with flood insurance especially under the national flood insurance program, but anybody who lives in a participating NFIP community can purchase flood insurance regardless of what their risk rate or risk level is."

Plymouth is one of those communities, so anyone living there should be able to get insurance. You can find out if your community is a participating community in the National Flood Insurance Program by clicking here for Indiana or Michigan.

You can also enter your address here to see if your property is in a high risk flood zone.

If you live in an participating NFIP community and you're being declined flood insurance you can call 800-427-4661 to find an agent in your area who can write you a flood insurance policy.