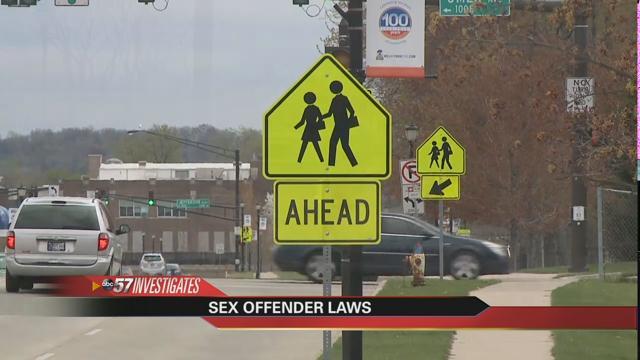 A local lawmaker said he is willing to look into tightening sex offender laws after our cameras caught children walking by the homes of registered sex offenders on their way home from school.

Caleb Phillips, 23, said something needs to change because his brothers and sisters walk by the home of an offender on their way to Emmons Elementary School.

Phillips said, “It messes with me a lot to see all these kids around here walk back and forth and he's standing right there.”

Phillips said when his mom is at work, there's not always someone available to walk with his siblings to school.

Phillips said times have changed and questions why Mishawaka Schools don't offer school buses for all their students.

Dr. Terry Barker, Superintendent for School City of Mishawaka, issued a press release in regards to the story.

A few miles away at Liberty Elementary School, one student said she walked into a scary situation when school got out in the afternoon.

"The car pulled up around one of our friends that was walking ahead of us and asked her if she wanted a ride and we all just ran up to her and pulled her back," Jasmine Sills said.

Sills said she was able to protect her friend because of the D.A.R.E class she takes at school with Mishawaka Police.

After speaking with students like Jasmine and concerned older brothers like Caleb, we brought their questions to Indiana State Representative Dale DeVon.

“I do whatever I can to protect children in any way that we can," said DeVon.

In his district, it's a law that registered offenders live 1,000 feet from a school or park where children play.

We asked DeVon how effective that law really is with kids who walk to school.

“It's not effective at all," DeVon responded. "Effective at this time at least, I think we need to look at fine tuning it."

After meeting a victim of sexual abuse in his district, DeVon said he is working to tighten sex offender laws here.

“Government tends to be reactive and we need to be proactive in a lot of areas like that," added DeVon.

Paul Smith is a registered sex offender who lives just a two minute bike ride from Emmons Elementary School according to Google Maps.

"They're not as much as a risk as most people think they are," said Smith.

Smith did not want to speak to the specifics of his child molesting case, but he did say if people did a little research on offenders in Indiana they would be surprised.

"Because I happened to know the numbers," said Smith. "Very few kids are hurt or molested by a stranger. Most of them are by family members or people that they know. Like friends of the family. Very few are strangers.”

After consulting with a police source, we discovered that was true in Smith's case. He was convicted of molesting a 13-year-old girl who he was a guardian over in Tippecanoe County.

“Like why is he staying two blocks away from a school zone you know," Phillips asked. "That's kind of crazy.”

Phillips said it still doesn't make sense to him, and he hopes the law changes.

If local families are willing to take the lead and organize the meetings, then DeVon said he's willing to form a summer study committee and potentially propose new legislation.

“A lot of us coming together is better than one of us making a decision," said DeVon. "So I think it's wise to allow it to come before associations and the criminal codes."

He's now interested in finding a way to better notify parents when sex offenders move into their neighborhood.

He also wants to study sex offender laws in other walking school districts.

"But where do you draw the line," asked DeVon. "Is one feet or two feet any different than being right there?"

If you are interested in being a part of the summer study, DeVon can be contacted by email.