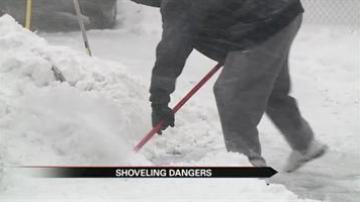 Before you pick up the shovel and sort out the snow on your sidewalks this week, ABC 57 News wants to warn you of a major health concern. Heart attacks can be an issue while shoveling, especially if you have any history of heart problems.

It is why ABC 57’s Kim Chappell teamed up with Dr. Douglas Huggett from the Southwestern Cardiologists in Niles to give you a warning before you start shoveling.

Doctors say to do it slowly and in small steps. As they hooked Kim up to an EKG machine doctors monitored her heart rate as she began shoveling outside their Niles office.

“Right now in the beginning her heart rate was around 70,” said Huggett.

70 is a normal resting heart rate.

But it does not take long for this task to put a strain on your heart.

“Shoveling is hard work and you can certainly over exert yourself very easily when you go out especially in the cold weather because you bundle up and then a lot of times get overheated,” said Huggett.

He says after 10 minutes you should stop, catch your breath and really ask yourself, “How am I feeling?”

"People should stop if they feel a tightness or chest discomfort,” said Huggett.

And unfortunately this basic burden does turn deadly for people across the country each winter.

On average more than 11,000 people head to the ER from shoveling and this snow season alone 36 people died from it.

Four of those fatalities were from our region. All of the deaths were caused by cardiac arrest.

“Too much exercise without being fit for it can lead to problems such as heart attack, arrhythmia or even sudden death,” said Huggett.

He has even seen it happen in his own Niles office, folks who shovel for 30 minutes or even an hour when their heart simply cannot handle the strain.

Kim's heart rate peaked at 160 in just 15 minutes, comparable to jogging. It is a lesson that this everyday task can be dangerous for anyone with a history of heart problems.