ABC57 Live in Pittsburgh: Notre Dame fans out in force 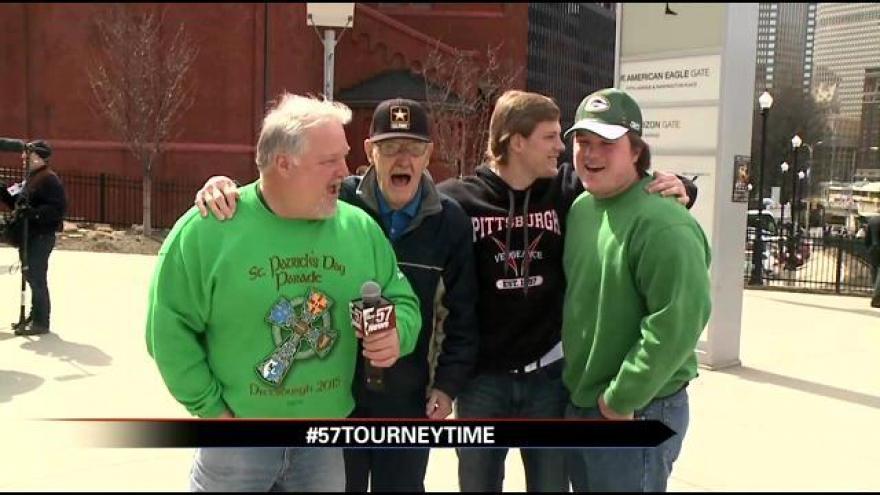 PITTSBURGH, Pa. - Notre Dame fans were in full force at the Consol Energy Arena Thursday afternoon to cheer on the Fighting Irish against Northeastern in the NCAA men's basketball tournament.

Emmy Calland and her father Dean Calland were excited to see their alma mater play in their hometown.

“We're very excited that they won! I'm not sure they played the best game I've ever seen them play but you know what? At the end of the day they pulled it out and that's what counts. We got the win, that's what we needed,” said the Callands.

The Callands plan to get seats for the next Notre Dame game, against the winner of the Texas-Butler game.

Shawn McCarthy carpooled with a group of Notre Dame fans from Philadelphia to watch the game.

“We bought our tickets late last night. For me and my friend it was a last minute decision so we left at 6 this morning to get here,” said McCarthy.

Conor Montijo and Stephanie Klotter, both seniors at Notre Dame, skipped out on class to drive up to Pittsburgh for the game.

“For me I've always wanted to go to an NCAA tournament game and this was the last chance as a student to go. And I figured we had a good chance at keeping it running. It was a close first one but it was worth the 5 hour drive out here and the five hour drive back,” said Montijo and Klotter.

Thursday's game was a nail biter. The outcome came down to the final minutes of the game.

“I just think it was kind of tournament jitters. We weren't in the tournament last year so it's just kind of getting back in the swing of things. It's always when you're the higher seed and it's close late, the arena kind of turns against you so it was good to see them put it away as they have in most games this year,” said Montijo and Klotter.

Notre Dame will play Saturday against the winner of the Texas-Butler game.