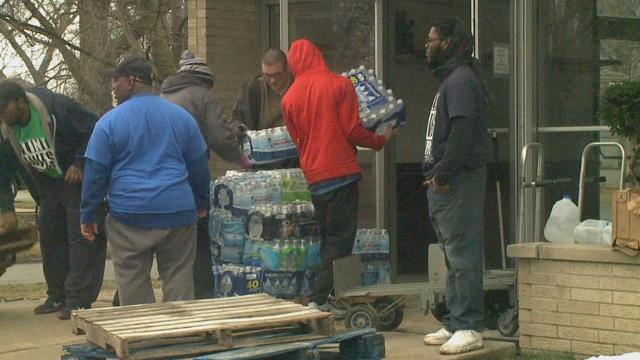 ABC57 reporter Taylor Popielarz followed a group of South Bend residents to Flint, MI as they delivered a truck full of water donated by the Michiana community.

The truck was loaded before sunrise Sunday morning, and the drive from South Bend to Flint was underway.

A 215 mile drive brought the truck to the city everyone is talking about for all the wrong reasons.

The city of Flint, MI is in the midst of a water crisis.

“They say they was gonna clean the water out by switching it from back to Detroit,” Flint resident Anthony Crain said. “But it’s still too much lead in it.”

Old lead pipes mixed with corrosive water has left a struggling city poisoned and without a basic human  need.

“We staying in this city…where they really don’t care about us,” Crain said.

So in an effort to help, a number of South Bend residents joined to make a difference.

“We just got together, collected water,” Winston Jr. said. “I have trucks I use for work anyway, so instead of using the extra expense to buy trucks, I told them to spend that money on more water.”

After weeks of collecting in South Bend, the first of two trucks filled with clean drinking water was delivered to Triumph Church in Flint.

“We just appreciate the support to let us know that we’re not alone,” Winfield said.

But even though the South Bend men behind “Flint Lives Matter” were able to bring hundreds of bottles of water to Flint, the need for more clean water is still huge.

“From a period of nine o’clock in the morning to nine o’clock at night, we gave out 6,000 bottles of water [on Friday],” Winfield said.

Winfield is a Flint resident who works for a security team hired by Triumph Church to help distribute water donations and keep the peace while doing it.

“As soon as we get it off the truck and get it unloaded, within an hour or two, it’s evaporated,” Winfield said.

Throughout Sunday afternoon, dozens of Flint residents drove by Triumph Church and stopped to ask volunteers if they were handing out free water. The volunteers had to explain to the residents that Sunday is the one day each week Triumph Church closes, as a water site, so it could regroup and reorganize, so they would have to come back Monday morning. Upon learning the news, each car drove on to the next location in search of clean water to drink.

“Right now, people are paying outrageous water bills and can’t even drink or bathe in the water,” Winfield said.

One of those people is Crain, a Flint resident and father of four.

Crain said he pays hundreds of dollars a month for water his family can’t use.

Crain and his family are among the many Flint households that cook with, bathe in and drink only bottled water – because in Flint, it’s dangerous to do otherwise.

“My girlfriend actually has family on the north side [of town] who actually been getting sick from the water,” Crain said.

Though they can’t live off bottled water for the rest of their lives, Crain said donations, like the one from South Bend, tell him someone still cares about him and his family.

You can still donate water and other supplies for Flint in various locations throughout South Bend, including 814 W. Indiana Ave.

Winston and his “Flint Lives Matter” crew are delivering the second truckload of water Monday morning, and they hope to continue making trips if Michiana residents keep donating.

If you want a “Flint Lives Matter” t-shirt, you can purchase one at Flinth2o.com – the proceeds help purchase custom shower heads that filter lead out of water that Winston and his team plan to donate to Flint residents.

Flint’s Triumph Church is handing out free water every Monday thru Saturday from 9 a.m. to 9 p.m. The church is accepting donations of any kind, including baby wipes.