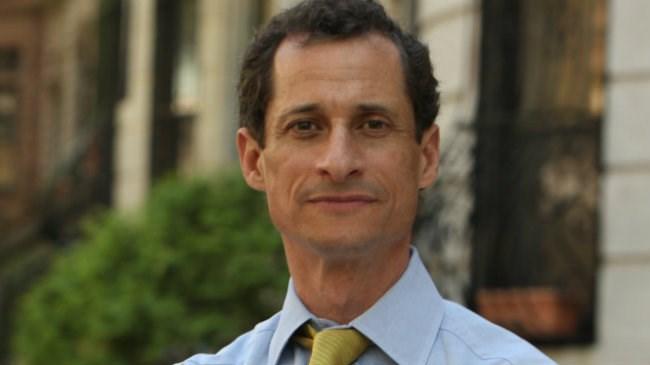 "After long and painful consideration and work on my marriage, I have made the decision to separate from my husband. Anthony and I remain devoted to doing what is best for our son, who is the light of our life. During this difficult time, I ask for respect for our privacy," Abedin said in a statement Monday.

Abedin was "furious and sickened" by the picture of Weiner and their 5-year-old son, Jordan, according to two people close to the family. The sources said she did not know about it or details of the latest sexting exchange until this weekend.

Weiner, who torpedoed his own political career five years ago with a sexting scandal and whose wife is Clinton's closest adviser, deleted his Twitter account after the latest report surfaced.

A Donald Trump supporter told the New York Post that the two of them exchanged racy photos over the course of about a year, including one exchange where she alleges that he sexted her with his son apparently sleeping next to him.

"Someone just climbed into my bed," Weiner allegedly wrote in a message, sent July 31, 2015, according to the Post.

He then is alleged to have sent a picture of a barechested man with white boxers and a bulge, while a small child is asleep beside him.

"Your do realize you can see you(r) Weiner in that pic??" the woman replied, according to the Post.

Abedin and Weiner had been distant and "heading on a path apart" for a few months, but she was reluctant to leave, according to the two sources close to the family. Her faith is a big part of that, as she has told friends and even Vogue magazine, and she knew it would draw headlines.

Weiner was with her and Jordan this weekend in the Hamptons, but left Monday morning. Abedin spoke with several close friends Sunday night and early Monday morning before deciding to announce a separation.

"She did not want this to be another distraction for Hillary," one friend said.

The Republican presidential nominee weighed in on the incident on Monday, saying Abedin made a "wise decision," but said Weiner's proximity to Clinton could possibly have compromised classified information.

"I only worry for the country in that Hillary Clinton was careless and negligent in allowing Weiner to have such close proximity to highly classified information," Trump said in a statement. "Who knows what he learned and who he told? It's just another example of Hillary Clinton's bad judgment."

A pair of news outlets, NY1 and The New York Daily News, both suspended or moved to cut ties with Weiner Monday.

"Anthony Weiner is on indefinite leave from the station," a NY1 spokesman told CNN's Dylan Byers. Weiner was a frequent guest on the New York news channel's "Inside City Hall" program. And the New York Daily News said it would no longer run his columns.

The New York Times asked Weiner recently if he had sexted anyone recently. He deflected at the time, saying "I'm not going to go down the path of talking about any of that," before changing the topic to Trump.

Photos published by The New York Post late Sunday show the man completely and others feature Weiner's face, but the photo of the boy has been partially blurred out, and the woman's face is blurred out in her photos.

The Post, which did not completely identify the woman, said she provided 12 selfies from Weiner. The paper described her as a 40-something divorced woman from the West.

Abedin and Weiner have been "essentially" separated for months, a close friend to Abedin said after she officially announced their separation on Monday.

The clearest sign of this: Abedin had recently not been wearing a wedding ring, a fact that did not go unnoticed by people inside and around the Clinton campaign.

Abedin has long been one of Clinton's closest aides, matched only by Cheryl Mills in her access and relationship with the woman who could be the next president. And Abedin herself has been thrust in the middle of the race, as questions about whether she helped Clinton Foundation donors gain special access have arisen recently, with a spate of new email releases.

Abedin is Clinton's most well known aide. While Clinton works the ropeline after events, Abedin is always close behind and Clinton supporters regularly ask the aide for selfies with her, much like they do with the candidate.

Weiner's relationship with Abedin is scrutinized during a recent documentary on his unsuccessful 2013 bid for a political comeback during the New York City mayoral primary.

He resigned from Congress in 2011 after he accidentally posted a lewd photo of himself on his Twitter account. In the midst of Weiner's first sexting scandal, it became known that his wife was expecting their first child.

Weiner is alleged, in a separate New York Post article, to have been baited last month into a racy online chat with a Republican operative he thought was a young woman.