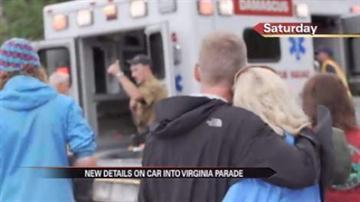 DAMASCUS, Va. — As many as 60 people were hurt when a car crashed into a group of parade goers Saturday in Virginia.

The accident happened in a town near the Virginia-Tennessee border.

People were there for the Hiker's Parade at the annual Trail Days Festival.

"The vehicle veered off the road on the right-hand side, stared striking bystanders at that point, and then moved into the hiker parade where it started striking hikers," said Damascus Police Chief Bill Nunley.

A witness said he was pushed out of the way of the oncoming car by a hiker. When he turned around, he saw hikers on top of the car and trapped beneath it.