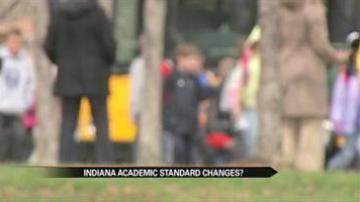 INDIANAPOLIS, Ind. -- If you live in Indiana, academic standards for your children could be changing. The plan would get rid of the Common Core curriculum and the state would create its own.

Senate Bill 91 would erase the Common Core curriculum currently in use and require the Indiana State Board of Education to adopt its own academic standards by July 1st.

Common Core is a single set of national educational guidelines put in place for Kindergarten through 12th grade. It was created by an association of state senators.

Indiana first adopted the standards in 2010, and under this proposal, new standards would take effect in 2016.

On Wednesday, the Indiana Senate Education Committee voted in favor of the bill - 8 to 3 - along party lines.

An analysis shows there wouldn't be any extra cost for the state to develop these new standards, but the price tag of beginning the assessments for the new standards is estimated around $26 million.

Next, the proposed plan will be brought before the full senate for its consideration. If the state does in fact decide to drop Common Core from Indiana classrooms, we would become one of only 6 states without it.