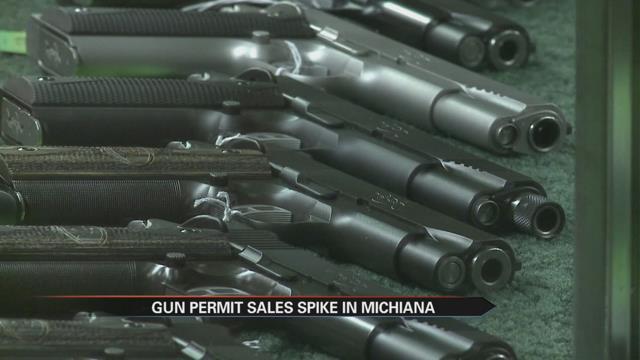 Gun safety is often discussed, but is it equally practiced?

This week, there were three separate cases of accidental or negligent shootings in Michiana.

“If your safety is something you’re worried about, a firearm would be a good idea,” Kodiak Firing Range and Training Facility Manager John Pemberton said. “But also, with that, you should have the training that goes with it.”

Guns are everywhere in our country, and though people are buying them at Kodiak in South Bend, Pemberton said he’s not selling just the firearms.

Firearm safety is increasingly relevant in towns and cities across America.

In Michiana, a lack of it may have proved dangerous this week.

There were three accidental – or negligent – shootings in the area between Monday and Tuesday.

A man showing his gun to a friend in a Dowagiac barbershop accidentally fired his weapon on Tuesday.

And a stray bullet went through the floor of a South Bend hotel room and entered the room below it on Tuesday.

Nobody was seriously injured in any of these events but the threat was still there.

Despite the scares, local gun experts still support arming yourself for protection.

“I think it’s a great idea, but again, you have to back that up with enough knowledge to use the gun properly,” Midwest Gun Exchange Retail Manager Kevin Claire said.

And according to those same experts, more people are choosing to arm themselves as mass shootings continue to happen.

“Every year it seems like we’re getting more and more folks, and especially women,” Pemberton said.

Places like Kodiak offer training sessions for both basic firearm training and self defense.

But if you already have a gun at home and need a refresher of some basic safety tips, Pemberton said the following:

- Keep your finger straight and off the trigger until you’re ready to fire.

- Know your target and what’s beyond it.

- Use the external safety because that’s how the gun was designed.