Activists gather to 'Take Back the Night' 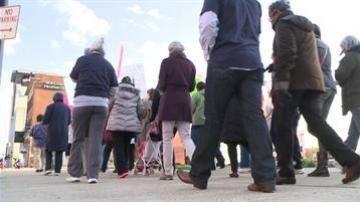 SOUTH BEND, Ind. -- Rape. Domestic Violence. Sexual Abuse. They're not easy subjects to talk about, but for Becky Callender, they're all a part of a dialogue that must take place.

Thursday night, she and others gathered in front of the St. Joseph County Courthouse to 'Take Back the Night'.

It's an event held nationwide, and one that activists say is both frustrating and rewarding.

"Knowing that we're providing services that are greatly needed in our community, it's also somewhat uplifting and exciting that we can be there for people in a time of need," Callender said.

Marchers made their way though downtown South Bend.

Meanwhile, folks at Saint Mary's College and the University of Notre Dame, did the same. In Indiana, one in four college-aged women will be sexually assaulted in their lifetime.

"The statistics are very much astounding," Connie Adams, Director of Belle's Against Violence, said.

She helps empower some of the victims and people looking to put a stop to the abuse.

"This is an opportunity to stand in solidarity with survivors, with allies, to really voice our commitment ot ending violence, and raise awareness," Adams said.

The ultimate goal being a day in which marches and protests like these don't have to take place.