Activists seek justice for Alissa through the White House 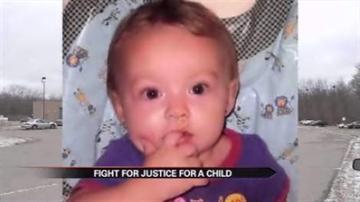 LAGRANGE COUNTY, Ind. -- A 16-month-old girl was murdered in 2009 and the child’s caregiver pleaded guilty to neglect of a dependent. Local activists want justice for Alissa Guerseny and have turned to the White House for help.

Boyd would not go on camera because ISP says its role in the case is complete.

We checked with the LaGrange County Sheriff's Department and asked the Sheriff if Alissa's case would be re-opened, he also said the case is closed.

Community activists say they want the prosecutor that tried the case, Jeff Wible and Judge Scott VanDerbeck to re-try the case.

Last February - Christy Shaffer reached a plea deal in VanDerbeck's courtroom. Shaffer pleaded guilty to one count of felony neglect of a dependent and ultimately served 83 days in jail.

Court paperwork shows Shaffer, Alissa's second cousin, had full custody of the 16 month old girl at the time of her death.

The online activist group working to drum up attention for the case says the prosecution and the judge knew Shaffer's father and allowed Shaffer to face the neglect charge instead of murder.

Now they have the 25,000 signatures needed for the White House to consider looking into  the case.

There is no telling how long this process could take or how many other cases are in front of this case.

Court paperwork shows another judge was appointed to the case in October 2012.

Shaffer is out of jail and is on court ordered home monitoring until August 2013.

Our attempts to reach Christy Shaffer, the Guernsey family, Jeff Wible, and Judge VanDerbeck were all unfortunately unsuccessful.