Adviser: Fraternity got 'permit' for party that led to pledge's death 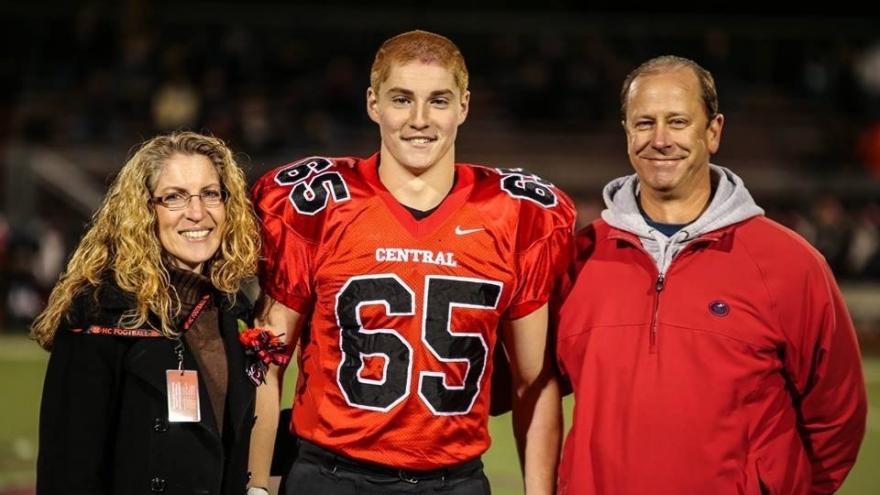 (CNN) -- Despite a longstanding ban on alcohol at the Penn State fraternity where a pledge sustained fatal injuries this year, members of Beta Theta Pi applied for a social permit from a student-run fraternity oversight council so they could serve alcohol at the event that resulted in Timothy Piazza's death, a Penn State employee and live-in house adviser testified Wednesday in state court in Pennsylvania.

Tim Bream, 56, said he was aware in advance that brothers of Beta Theta Pi had applied for the so-called "permit" to serve alcohol the night that Piazza fell repeatedly -- including down a flight of stairs -- following an initiation ritual known as "the gauntlet" that involved heavy drinking. Surveillance footage shown in court documents Piazza's struggle.

"The fraternity was hosting a social that night which Mr. Bream had been advised had been approved by the Interfraternity Council ('IFC'), at which they were permitted by the IFC to serve alcohol," Bream's attorney wrote in a motion filed Tuesday.

Bream, who has not been charged with a crime, denied knowing at the time that Piazza had gotten injured that night at the fraternity house. He testified in response to questions from attorneys for some of 18 fraternity members facing charges -- ranging from reckless endangerment to involuntary manslaughter -- in connection with Piazza's death. The fraternity organization also faces charges.

Bream's assertions about Penn State's Interfraternity Council, known as the IFC, reveal a new thread in the web of questions surrounding who may be responsible for the 19-year-old sophomore's death.

"Until this morning, I thought the whole position of Bream, Penn State, the frat was ... 'I know nothing, I see nothing, we don't condone this,'" defense attorney William Brennan told CNN. "And apparently, there's a permit applied for. (Bream's) own lawyers say the permit was approved, and the permit was for alcohol. You can't have a 'dry house' with alcohol. It's one or the other."

Added another defense lawyer, Leonard Ambrose: "That testimony was a revelation because the commonwealth's entire premise is based upon (the notion that) it's a dry house."

Both Penn State and the IFC maintain they weren't responsible for enforcing the chapter's alcohol ban.

"In the case of the former Beta Theta Pi fraternity, their declaration of being a 'dry house' was an agreement they had with their national organization and one in which the local chapter was expected (by its national organization and perhaps its alumni board) to enforce. These agreements are independent of the university," the Penn State spokeswoman told CNN Wednesday.

Penn State also pointed to the IFC, an independent student-run group touted online by the university's Student Affairs department as one of four fraternity and sorority governing councils.

"Any chapter that adopted greater social restrictions was expected by the IFC to enforce those restrictions within their own house and among their members," the university spokeswoman said.

Meantime, the IFC holds that "chapters are responsible for following their own national organization's policy and facility rules, which could include being dry," the organization's spokesman, Penn State senior Michael Cavallaro, told CNN Wednesday.

Penn State long has tried to separate itself from the IFC's decisions, stating that the IFC operates autonomously. However, Penn State at least once overruled a decision by the organization, in 2015, when it shut down the school's Kappa Delta Rho chapter, citing evidence of hazing; the IFC in the same case had suspended the fraternity for a year.

The student-run IFC maintains it was not responsible for enforcing Beta Theta Pi's alcohol ban and that its "event registration" system does not grant "approval," an IFC spokesman told CNN on Wednesday. The process is designed to notify a third-party security company so the firm can perform spot checks to enforce IFC rules, he said.

Indeed, a private security firm hired by the IFC was at the Beta Theta Pi house the night of the initiation, within moments of Piazza's fall, the lead detective in this case has testified.

Penn State, which employs Bream as its head football trainer, maintains that "IFC and Penn State are separate," a university spokeswoman told CNN.

Penn State also asserts that Beta Theta Pi's national fraternity organization -- not the university -- was responsible for enforcing the chapter's alcohol ban, the spokeswoman said. The fraternity's local chapter, which was chartered by the national group, employed Bream as its in-house adviser, Bream's motion states.

In a statement to CNN, the national fraternity's spokesman responded to the allegation about the alcohol permit, saying, "Unfortunately, we can't speak to the process or methodology that the IFC or Penn State followed in approving social events in our chapter house that was required to be substance-free."

'No evidence he participated'

Defense attorneys, who questioned Bream on Wednesday as part of a preliminary hearing that began in June, implied that their clients believed they had permission from Bream in his role as fraternity adviser to host the initiation party and to serve alcohol.

"In no way, shape or form would (I) give permission to any type of alcohol abuse, 'gauntlet,' nor did I know about it that evening," Bream testified.

Bream, who appeared in court after contesting a subpoena from one of the accused fraternity members, told the judge he watched the pledges file into the house for a "bid acceptance" ceremony on the night Piazza got hurt -- but went to bed at the fraternity house before the students went to the basement, where prosecutors allege the hazing took place.

District Attorney Stacy Parks Miller, who had objected to the subpoena compelling Bream's testimony, argued in court Wednesday that the fraternity brothers were trying to shift blame.

But it quickly became clear that Bream will continue to be part of this case.

During questioning by defense attorney Steve Trialonas, Bream denied having a conversation with fraternity pledge master Daniel Casey about the initiation plans.

"(Did you) discuss what was going to occur with the ceremony?" Trialonas asked.

Trialonas, moments later, asked: "Did you observe a keg of beer?"

"(Did you see) my client holding a cup of beer during (the) conversation?"

As Bream testified, Casey shook his head in apparent disagreement. He has denied the charges against him.

After the hearing, Trialonas told CNN, "I'm confident the evidence will show Tim Bream was aware of the post-initiation drinking events and posed no objection to the same. He stated affirmatively that he had no idea that drinking games were going on. He's going to have to deal with that later on."

Bream acknowledged from the stand that he exchanged text messages with some fraternity brothers in the hours after Piazza was taken to the hospital, and prosecutors will now take a look at those messages, Kline said.

But overall, the judge limited Bream's testimony by sustaining objections lodged by his attorney and the prosecutor.

"Tim Bream's testimony raised more questions than had answered," the Piazza family's attorney, Tom Kline, told CNN. "Something that I think anyone who has followed this closely really wants to know is what Mr. Casey really says about what happened in his conversation with Mr. Bream. That testimony I would personally like to hear."

"The takeaway from Mr. Bream's testimony today as I saw it was that there was a man who said, 'I saw nothing, I knew nothing and did nothing,' and there are the lawyers saying he knew a lot, he saw a lot and there are people who will say so," Kline said.

"You can't have it both ways. You can't have a system where there isn't supposed to be alcohol in a particular fraternity house, and then it's signed off on by a system where it's approved," Kline said. "I think that Penn State chose not to know certain things. The things Penn State wanted to learn, they could easily learn. The things they wanted to turn a blind eye to, they turned a blind eye to."

A Pennsylvania grand jury has been looking into Penn State's overall response to fraternity issues.