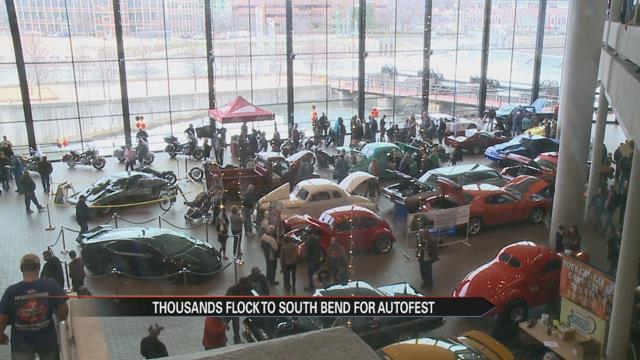 Tons of cool cars, motorcycles, boats and more are on display in the Century Center this weekend for the Afdent AutoFest.

“Anything cool with a motor, we have here,” AutoFest Chairman Mark Hosaflook said.

The Afdent AutoFest has every corner of the Century Center filled this weekend with race cars, bikes, sports cars, muscle cars and more.

“Just about anything you can think of that’s cool and goes fast, we have,” Hosaflook said.

Hundreds of families flocked to the Century Center Saturday to catch a glimpse of the auto show.

Along with many different types of vehicles on display, there is an RC car race track where you can race your friends for $3.

“I just like how they wreck into each other sometimes,” Alex Stuber said.

Car collectors from across the Midwest gathered in South Bend to make the event possible.

“We have cars in from Kentucky, Illinois, Ohio, Michigan, obviously a lot come from Indiana,” Hosaflook said.

The event is also bringing locals together, like South Bend grandfather Leroy Brenneman and his grandson Jared Basker. The two are showing Brenneman’s 1969 Pontiac Catalina for the first time.

“It’s pretty neat because you get used to seeing everybody else’s nice car [at car shows] and you figure, well I wonder if something like [the Pontiac] would pass selection,” Basker said. “And then you get to be on the other side of the fence, really, and let people see your car.”

The two have bonded over the all-original car, but Brenneman joked it was “debatable” if he’d ever pass his prized possession on to his grandson.

Along with being a cheap, family-friendly outing, the AutoFest is also helping contribute to local charities and organizations.

“We support the Indiana Fallen Heroes War Memorial…the Boy Scout Troops of America…the Niles Burn Run,” Hosaflook said. “A lot of the money we [raise] goes back into the community area; it stays here, it doesn’t go somewhere else.”

The AutoFest costs $5 per person, but children 7 and under get in for free. Parking at the Century Center is an additional $5.