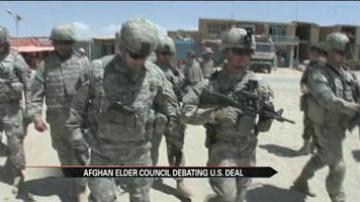 AFGHANISTAN -- This week a council of Afghan elders will gather to decide whether American troops will stay in Afghanistan.

Up to 15,000 foreign troops could stay in the country beyond the 2014 deadline if lawmakers approve a bi-lateral security agreement.

The President of Afghanistan warns that any deal would face a stumbling block, lack of trust.

"My trust with America is not good. I don't trust them and they don't trust me. Last ten years have shown that I have fought with them and they have made propaganda against me," said Afghan president Hamid Karzai.

The agreement would mean foreign, but mostly American troops, would be deployed for the next 10 years.