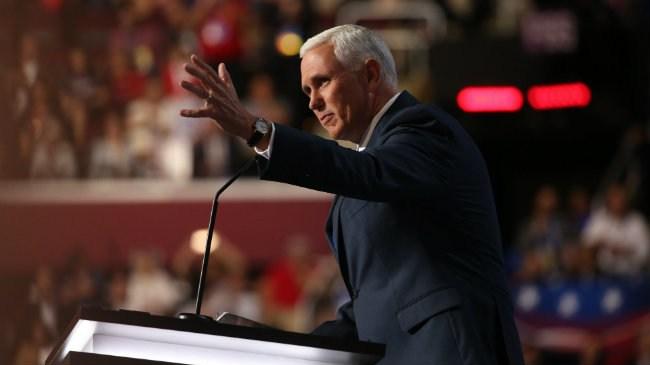 Hours earlier Thursday, Pence set off alarms inside the Republican establishment when he declined to back the senators from Arizona and New Hampshire.

"I look forward to supporting Republican candidates in the days and weeks ahead all over the country, and so does Donald Trump," Pence said on his campaign plane when asked directly by reporters if he would endorse McCain and Ayotte.

Pence later reiterated his support, telling WTKR in a transcript provided by his campaign that "of course I support John McCain and Kelly Ayotte and all of our Republican incumbents."

On Tuesday, Trump sent shockwaves through the Republican Party when he declined to endorse McCain and Ayotte, as well as House Speaker Paul Ryan. Trump has feuded with McCain over the Arizona senator's handling of veterans issues and Ayotte has claimed she is not endorsing Trump, though she supports him.

The next day, Pence said he "strongly" endorsed Ryan. The Indiana governor said he had discussed his support of Ryan with Trump earlier in the day and that his running mate encouraged him to endorse the House speaker.

McCain's primary opponent, Dr. Kelli Ward, put out a statement after Pence's initial answer, slamming her rival for criticizing Trump and his supporters.

"Donald Trump and Mike Pence recognize that we cannot win Arizona's US Senate seat in November with McCain, the ultimate establishment insider and champion of compromise, as our nominee," Ward said in the statement. "Only someone with real-life experience outside politics can bring the bold, fresh, fearless new leadership it will take to win. We need a conservative champion for Arizona's future who will heal the (Department of Veterans Affairs) and mix the mortar to fix the border."

John Weaver, a top adviser to former presidential candidate John Kasich, also weighed in over Twitter, reflecting on his time with McCain during his presidential campaign in 2000.

"I remember traveling with John McCain to Indiana to campaign for, several times, for a desperate Mike Pence. Shame on him. #Karma"

McCain and Pence served in Congress at the same time, and Pence recently met with McCain while campaigning in Arizona, where he praised the senator's leadership.

As for Ryan, Pence described him to reporters Thursday as "a very close personal friend" and said he "felt very strongly about endorsing his re-election."

Trump talked about the disagreement with Pence over Ryan at a campaign event in Portland, Maine, on Thursday, saying that Pence told him he wouldn't endorse the speaker if it would cause "any complications and problems."

A source familiar with the Trump-Pence relationship told CNN's Maeve Reston Wednesday that it's not unusual for the running mates to take opposite or differing positions by design. In fact, Trump has given Pence wide latitude to speak his mind and has personally encouraged him to stay true to his own ideas, believing Pence is loyal to the campaign.

When asked about differences between himself and Trump, Pence told reporters Thursday that although they may have different styles, they have "the exact same goals, the exact same vision."

"I've seen my role as simply amplifying the points that Donald Trump is making," Pence said, adding that the two talk almost every day.

Pence also said there's time for Trump and Ryan to grow closer in the upcoming months.

"These are two men who I believe are going to play an enormously important role in restoring the strength of this country at home and abroad," Pence said. "I think you're going to continue to see that relationship grow."