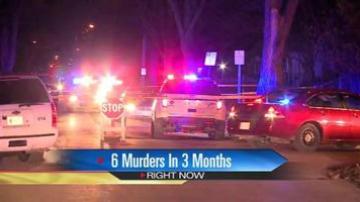 ST. JOSEPH COUNTY, Ind. -- County Metro Homicide, South Bend Police and the deputy mayor held a press conference Friday to discuss recent acts of gun violence. Leaders said there have been six murders in the last three months and that is unacceptable.

"It is sickening to us that we have to consistently go out and tell parents that their children are dead," said Tim Corbett, Unit Commander, St. Joseph County Metro Homicide.

Wednesday night 21-year-old Tyrone Kelly was shot and killed and two others were injured.

Family members said Kelly was a hard worker and a loving father.

Joilise Crossley has been charged with voluntary manslaughter in Kelly's death and criminal recklessness for allegedly shooting David Cross and Jerry Wright.

Police say that Kelly has a son with a woman named Tyvenchia Hayes.

Kelly's family members told us off camera that Kelly didn't want his son around drugs, guns or Crossley.

According to police that's what Kelly and Crossley were arguing about the night Kelly was shot and killed.

Crossley admitted to police she fired her gun .

"I'm asking the community to not only assist us in investigating a particular case or cases but to rise up with one moral voice and say as a community this is unacceptable," said Teachman.

Crossly is in the St Joseph County Jail.

If convicted, she faces up to 66 years in prison.