Agencies cracking down on "skimming" devices at gas pumps 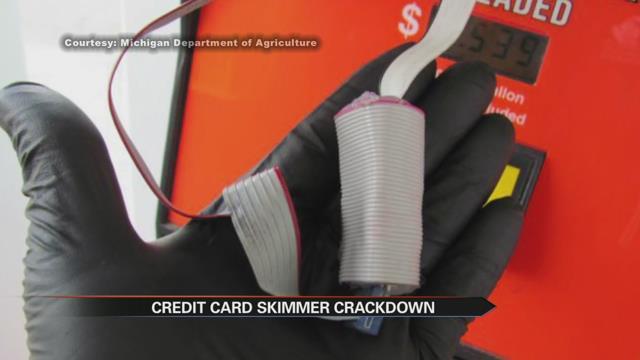 Gas station owners and federal agencies are joining forces to crack down on the use of credit card skimming devices at the pump.

Last month, the Department of Agriculture and Rural Development conducted a large-scale investigation to find the devices that "skim" credit card information for a third party to steal the information.

Since August, owners and inspectors have discovered about 16 gas stations with skimming devices across the state of Michigan.

The Shell station on East Napier Avenue in Benton Township was reported to the Department of Agriculture for having a “skimming” device in September.

The owner said he wants his customers to know there were no official reports of credit card fraud linked to the skimmer found at his station.

The owner said he regularly checks the dispensers and he went directly to the Secret Service to hand it over. He did not want to go on camera.

Daniel Johns said his mom's card was "skimmed" and used after she pumped gas at a station near Big Rapids, Michigan.

Johns said, "My mom went there to get gas like normal and when she swiped her credit card and hit debit, somebody from Santa Barbara or Santa Cruz California had stolen her information on her credit card.”

Johns said it happened in 2009 and thieves charged a thousand bucks or so on his mom's card.

Johns said, “The bank ended up insuring the money and they got it back.”

Johns is surprised these types of crimes haven't slowed down.

Michigan State Police Lieutenant Michael Dawson believes most of the incidents are tied to a national ring.

Recently 5 people from Miami, Florida were arrested in Kent County, accused of stealing debit and credit card info in western Michigan through these devices.

Dawson said in the past year gas stations have started posting stickers over the dispensers and they are supposed to tear if it has been tampered with. He doesn't believe the stickers really work.

Dawson said, “The belief is that maybe the criminals that are involved in this have their own stickers for the gas stations so they could get into it and tamper with it and then put a sticker on it and you would just assume the gas pump is safe.”

According to the President of the Michigan Petroleum Association, they are working with credit card companies to ensure safety at the pump.

Mark Griffin said, “The station owner hasn’t done anything wrong in this example, they’ve been attacked, they’re doing everything they can to ensure that it’s a safe environment for you to use your credit card.”

Griffin said by October 2017, all gas stations will be required to change dispensers out at the pump and install high tech micro chips to target scammers from stealing your private info.

Griffin said, “Those new dispensers when the front door is open on those, they will automatically shut off and they can only be turned back on inside, so that’s one of the new security features that are being put in place.”

In the meantime, if you see someone opening up a pump with a key who doesn’t look like a gas station employee then it’s important that you say something to the clerk immediately.