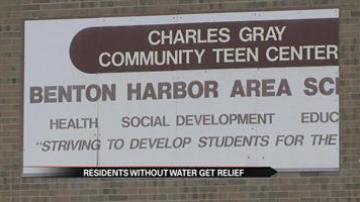 BENTON HARBOR, Mich. -- Several agencies in Benton Harbor are opening their doors for residents without fresh water. Many residents are without water because of frozen water lines.

Stephanie Harvey-Vandenberg knows just how important water is. It's part of the reason why she volunteered the Renaissance Athletic Club's services.

Benton Harbor residents with frozen water lines can go there to shower.

The club is just one location in Benton Harbor helping out.

People can also go to the Charles Gray Recreation Center for a hot shower.

Residents can also go to City Hall to fill up containers with water.

"The city I know is working as quickly and efficiently as they can to help the citizens in the community to get their pipes fixed, so as long as RAC can be a good community servant, we will be," said Harvey-Vandenberg.

The city is hoping more community groups will follow RAC's lead and volunteer their services to those who really need it.

Officials say frozen water lines could be a problem for at least another month.

Because freezing temperatures are expected Tuesday night, the city wants residents with water to leave one faucet running a thin stream of cold water until April 1st.