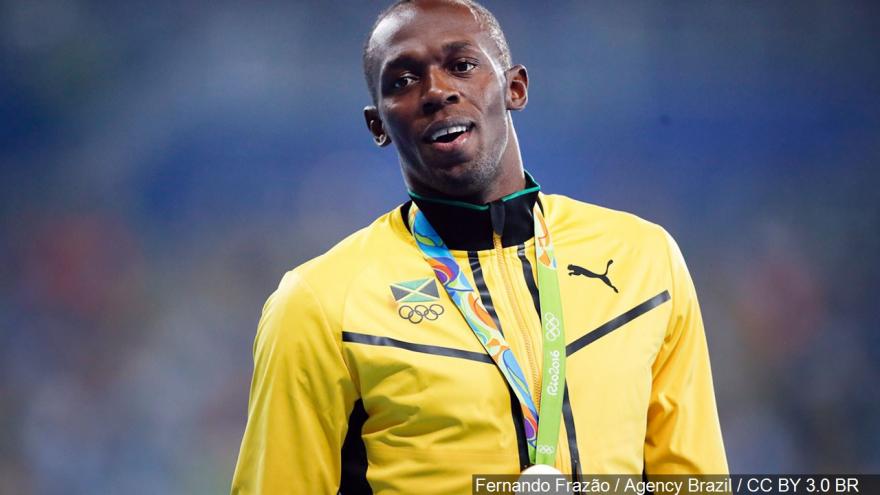 (CNN) -- Usain Bolt's farewell appearance at the world championships ended in painful and disastrous fashion as he pulled up injured on the final leg of the men's 4x100m relay Saturday.

Bolt took the baton for Jamaica in third place but within a few strides he had fallen to the ground, clutching his left leg, as host Britain secured a shock gold ahead of a United States team containing Justin Gatlin.

The 30-year-old Bolt, beaten into third in the individual 100m behind Gatlin and his US team compatriot Christian Coleman, was comforted by teammates after getting to his feet, his face etched in pain.

The capacity crowd in the London Stadium was still digesting the shock earlier defeat for home hero Mo Farah in the men's 5,000m final, before the drama of Bolt's last agonizing appearance.

READ: Bolt in numbers - Why the Jamaican is the greatest

He had been bidding for a 12th world championship gold to bring down the curtain on his glittering career, but instead limped out of the London Stadium arena.

They won in 37.47 seconds, with the US taking silver at 0.05sec and Japan with a surprise bronze.

For his massive global following, the perfect script would have seen the Bolt of old running down Britain and the US for yet another gold, but it was not to be.

"He didn't tell us exactly what happened but from what I saw, it looked like a strain or a cramp of some sort," teammate Julian Forte told IAAF radio.

"He kept apologizing to us but we told him there was no need to apologize -- injuries are part of the sport."

"The last three weeks have been hard for him, you know. We hope for the best for him," he added.

Jamaica's 110m hurdles champion Omar McLeod, who ran the first leg for the quartet, summed up the feeling of everyone.

"Usain Bolt's name will always live on," he said.

But another teammate, Yohan Blake, who won Olympic relay gold with Bolt in 2012 and 2016, slammed organizers for the delay in starting the race because of medal ceremonies.

"Usain was really cold. In fact Usain said to me, 'Yohan, I think this is crazy'," he said.

Farah bows out with silver

Farah, who won the 10,000 title in dramatic fashion of the opening day at the London Stadium, had to settle for silver behind Ethiopian Muktar Edris in his final championship race on the track.

He edged out American Paul Chelimo in a desperate dash for the line, the last mile of a hitherto slow run race run in just under four minutes.

Farah, 34, will now turn his attention to the marathon after failing in his bid to double up at the Olympics or World Championship for the fifth time, including double gold in London 2012 and the Rio Games last year.

It was not the farewell Farah wanted, but he pointed to his earlier exertions in a dramatic 10,000m final as reason for lacking his usual devastating finish.

"I gave it my all. I didn't have a single thing left to give at the end."