Ahead of debate, Clinton mum on Trump implosion -- for now 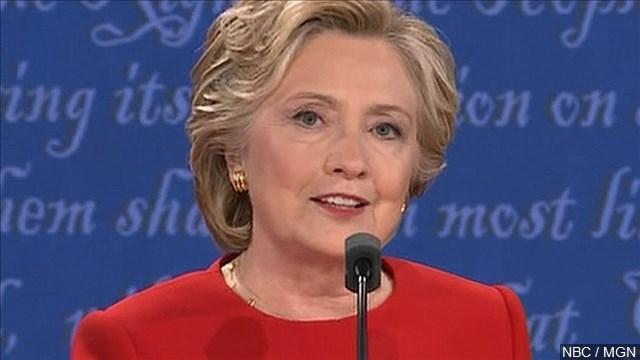 But on Sunday, she plans to respond to the sexually explicit remarks "early" in the contest, according to a source with knowledge of her debate strategy.

Clinton was hunkered down and preparing for Sunday's debate with her top aides at the Doral Arrowwood, a hotel and spa here, when The Washington Post published a bombshell video of Trump casually talking about sexual assault on Friday. The subsequent 24 hours have rocked the Trump campaign to its core and rattled Republicans nationwide.

Based on their confidence in Clinton's ability to respond to Trump, Clinton's top aides decided the Democratic nominee should try to maximize the audience for her response and make her first comments during what could be a debate watched by more than 80 million people.

The campaign official said Clinton wanted to get the response out of the way early, likely in order to knock Trump off his heels and use that to hurt him throughout the debate.

The tape of Trump saying that because he is famous he is able to grope and assault women entirely changed Clinton's debate preparations. While Clinton and her aides always knew that a debate with Trump would be difficult to plan for, the release of the Trump video on Friday made it even more likely, Democrats said, that Sunday's contest would be unpredictable and nasty.

Before the first debate, Clinton and her aides prepared for Trump to confront her on a litany of uncomfortable subjects, namely Bill Clinton's infidelity. But sources said they planed for Trump, in an effort to reach out to skeptical Republicans and undecided voters, to be more presidential than bombastic.

But now that Trump has released a defiant video apology -- in which he alluded to how he will go after Bill Clinton on Sunday -- sources said the expectation that Trump would be presidential in St. Louis went out the window.

Clinton and her aides scripted one-line responses to Trump before the first debate at Hofstra University, and Democrats close to Clinton said they expect the nominee to prepare the same way ahead of Sunday's contest. She will come prepared with a way to respond to Trump if he brings up her husband's infidelity, sources said. But -- as she did last month -- Clinton will look to give Trump as much time as he needs to try to explain his comments, hoping that the more time he talks about them, the worse it is for Republicans.

Clinton's primary takeaway after her first debate with Trump was that preparation matters, aides said. So in the days leading up to Sunday's contest in St. Louis, Clinton has heavily prepared for the town hall debate format.

Town hall debates present Clinton and Trump with a different challenge than last month's contest: Both nominees will need to prepare to attack one another while also connecting with the undecided voters who will ask them questions. Those challenges were elevated with Friday's release of the video.

Clinton has considerably more experience than Trump in the town hall format. Clinton headlined 19 town halls in Iowa, 19 in New Hampshire and nine in South Carolina during her run for the Democratic nomination and at times took uncomfortable and direct questions from voters.

That is considerably more than Trump, who is more familiar with large rallies and headlined a rare town hall in New Hampshire on Thursday as a way to prepare for Sunday's debate.

Clinton is surrounding herself with the same team of aides who led her prep ahead of last month's debate at Hofstra University.

Jake Sullivan, Clinton's longtime policy aide, has taken the lead on preparing for Sunday's debate, according to a source with knowledge of the preparations. Sullivan has been joined by Ron Klain, who advised President Barack Obama; Karen Dunn, a longtime lawyer and aide; John Podesta, Clinton's campaign chairman; and Jennifer Palmieri, Clinton's communications director.

Philippe Reines, a longtime adviser known for his combative style and fierce loyalty to Clinton, is playing Trump in debate prep, the same role he played last month.

Clinton is said to be very impressed with Reines' Trump impersonation. While he isn't imitating Trump's voice, the way he emulated his cadence and hand motions led Clinton to exclaim, "Wow, that sounded exactly like Philippe," when she came off the debate stage last month.

After headlining a fundraiser in New York City on Thursday, Clinton headed to the Doral Arrowwood, which is near her home in Chappaqua, where she met aides for further debate prep.

Clinton returned to the hotel on Friday, conducting a five-hour sessions in the afternoon, and came back again on Saturday.

Trump has mocked Clinton for her hours of preparation before the debates, but is now said to be preparing for the debate while trying to save his campaign.

"Do you really think that Hillary Clinton is debate prepping for three or four days?" Trump asked mockingly in New Hampshire on Thursday. "It's not debate prep. She's resting, she's resting. She's resting and I want to be with the American people."

Clinton has laughed off Trump's attacks on her preparation, even turning it into an attack line during the first debate.

"I think Donald just criticized me for preparing for this debate," Clinton said wryly after Trump hit Clinton for taking time off the trail. "And, yes, I did. You know what else I prepared for? I prepared to be president. And I think that's a good thing."

Sources said after the first debate that they scripted that line because Trump and his surrogates telegraphed that he would go there at the debate. Because Trump is doing the same ahead of Sunday's contest, it is expected that Clinton will be ready to hit back once again.

Unlike ahead of 2016's first general election debate, where aides tried to lower expectations around Clinton, top aides have been heralding the former secretary of state's experience with town halls.

"I think Hillary did ... a lot of town halls during the course of the primaries and into the general. So she is very used to the format. She likes it," Podesta said on Wednesday. "She likes answering questions from individual citizens. She listens hard, she relates to people."

Clinton's campaign chairman added that town halls are "a format that Donald Trump isn't as used to. ... I think it is a natural format for her. She likes engaging with people."