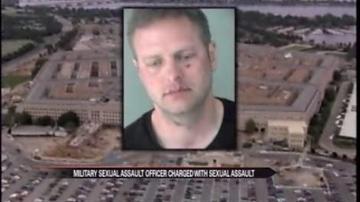 Jeff Krusinski, a 23-year military veteran, was arrested this weekend. Authorities say he approached a woman and groped her inappropriately.

He has since been charged with sexual battery.

"How can we possibly stop the amount of sexual assault and rape in the military if the person in charge commits the same crime?" said New York Sen. Kirsten Gillibrand.

The arrest comes as the Pentagon just released its annual figures for sexual assault in the military that show a six percent rise in reported assaults.

Krusinksi was immediately removed from his position following his arrest.