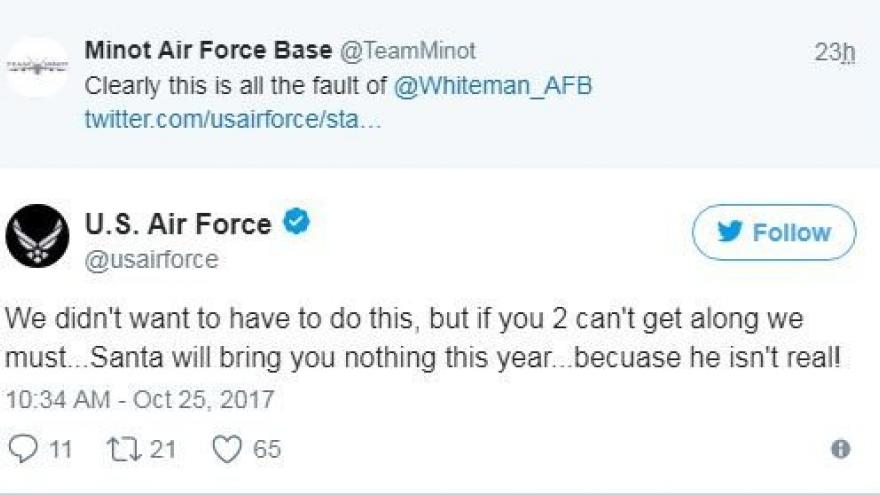 (CNN) -- The US Air Force shattered the magic of Christmas for millions of children Wednesday by publicly denying the existence of Santa Claus on its official Twitter account, before eventually retracting the controversial statement.

A full two months ahead of the winter holiday, the Air Force invoked Santa Claus -- a magical figure who runs a toy factory from the North Pole -- in an attempt to mediate a Twitter feud between two of its bases.

"We didn't want to have to do this, but if you 2 can't get along we must...Santa will bring you nothing this year...becuase [sic] he isn't real!" the Air Force tweeted.

The Air Force also threatened to take away the bases' television privileges for a week.

Later Wednesday morning, after the Washington Examiner picked up the story, the Air Force attempted to walk back its shocking claim about Santa, who also goes by the aliases Kris Kringle, Father Christmas and Saint Nicholas.

"Santa is real," the Air Force clarified in the tweet, which was directed at Examiner reporter Anna Giaritelli. "Bluffing to get @Whiteman_AFB @TeamMinot in line. Tracking him (Santa) in Dec @NoradNorthcom"

Several US government agencies have previously acknowledged the existence of Santa, including the Department of Transportation, which approves his flight plans. In 2013, a spokeswoman for the State Department reassured journalists that Santa has a visa waiver in the United States, allowing him to visit the country every year without issue.

The US Postal Service has similarly acknowledged Santa's existence and has been delivering letters to him for over 100 years.

And while the current commander in chief, President Donald Trump, has yet to weigh in on the Santa issue, he has been vocal in his support for the Christmas holiday, urging people to reject the "happy holidays" greeting in favor of saying "merry Christmas."