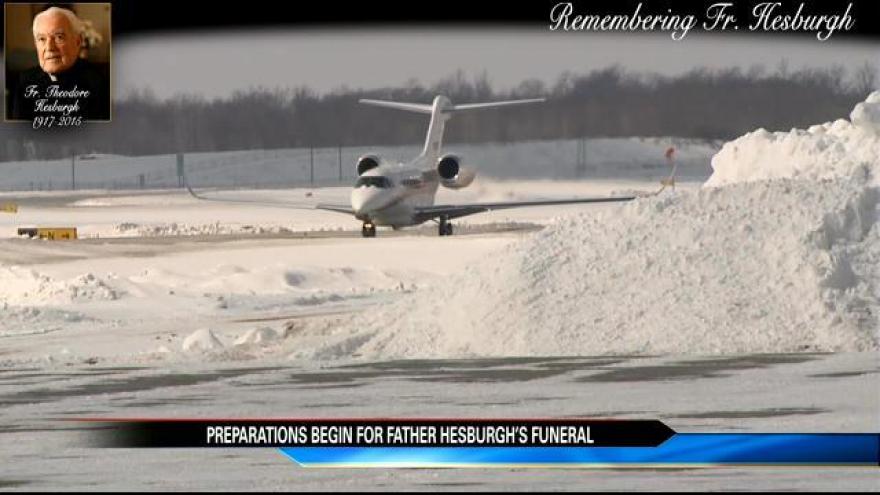 SOUTH BEND, Ind. - You might see an influx of planes in the sky in the next couple of days in South Bend. Atlantic Aviation is expecting an influx of guests because of Father Theodore Hesburgh's funeral at Notre Dame.

On Friday, Atlanta Aviation along with the airport authority and air traffic control, had a meeting to plan for possibly hundreds of planes that might be landing at South Bend's airport in coming days.

Christi Peterson said, “We have an additional 23 employees that we have called in from our other Atlantic Aviation locations as far as North Carolina, people that will be flying in to help us out during this time.”

The Customer Service Manager at Atlantic Aviation said they are preparing for the unexpected.

Peterson said, “Because we are an airport that does not require reservations they don't have to call us, so we are prepared to handle 200 plus aircraft. We hope to treat this like a football game. Our largest football game last year brought us 275 aircraft.”

Peterson said, “It seems right now that any of the traffic that is coming to us is planning to stay for the day because the University is offering an overnight viewing, so people can come and go as they please.”

Notre Dame said former President Jimmy Carter and former Secretary of State Condoleezza Rice will be among the guests at Father Hesburgh's service.

There are reports that Vice President Joe Biden may make an appearance to honor Father Hesburgh. ABC57 has put a call into his office to confirm.

Peterson said, “Secret service would arrive if there were any former Presidents or anything like that and they would be handled at a remote location. They wouldn't actually come through our facility. It would be handled privately and separately.”

Notre Dame is also providing bus transportation from the airport to campus for the funeral.