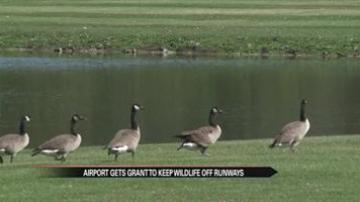 MICHIGAN CITY, Ind. -- It's a problem every airport faces - how to keep wild birds and animals from creating safety hazards for fliers. Just how common are bird strikes?

Every year in Michiana, there are dozens of cases involving planes and wildlife, but not all of them are reported.

The Federal Aviation Administration keeps track of airstrikes involving wildlife. But participation is voluntary. There is no law requiring pilots or airlines to report every incident. So the number of cases could be much higher.

Humans mastered the air more than 100 years ago.

Flying is one of the safest ways to travel, but every year Jessica Ward sees her fair share of problems. She manages Michigan City's airport and they just received a grant to deter wildlife.

"It's going to be a 10-foot high wildlife fence, and have three strands of barbed wire, and at least three-to-four feet of it is going to be buried underground as well," said Ward.

It's no secret, airports and wildlife don't mix, and while there are fences to keep deer and other critters out. There's nothing to stop birds from flying right over.

"Unless it's like a really large bird, there are times they don't know they've even hit anything," said Ward.

It's an issue some passengers may not be aware of.

Last year in Michiana, more than a dozen airstrikes involving wildlife were reported, but those are only the ones we know about.

"Unless a pilot reports it, we don't see it from the airport," said Ward.

There's no law requiring pilots or airlines to log an incident.

We asked if that was important information people should know.

At South Bend Regional Airport 100 incidents have been logged since 2007.

A spokesperson says those figures could be even higher, but she wasn't able to comment on whether pilots should note every incident.

There have only been a few cases of bird strikes this year, but that number could increase when birds migrate for the winter.