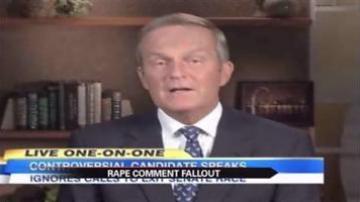 MISSOURI -- The Missouri congressman and U.S. Senate candidate who made controversial remarks about rape stands by his words.

Even though almost every Republican has called for Todd Akin to step down, he said he will remain in the race.

Akin went on "Good Morning America" to try to explain his comments about rape and abortion.

"I don't apologize for the fact that I'm consistently pro-life," Akin said. "I believe in defending the unborn. And I believe based on those kind of principles, we can win this race."

Presumptive Republican presidential candidate Mitt Romney called on Akin to drop out immediately. And the Republican National Chairman Reince Priebus has said that Akin is not welcome at the Republican Convention next week.