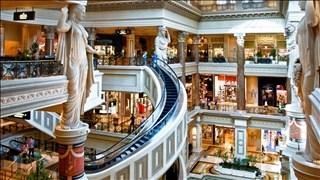 After an al Qaeda group issued a call to attack malls in America, Canada, and Great Britain, shoppers are being asked to keep a watchful eye out for suspicious activity.

Authorities are taking the threat very seriously, and shoppers are told to be vigilant.

In September 2013, the Somali terror group took credit for the attack in the Westgate Mall in Nairobi, Kenya that left 67 people dead.

Authorities in the United States are particularly concerned because al-Shabaab has been especially effective recruiting Somali immigrants from the Minneapolis-St. Paul area to join its ranks.

“The reason I think we're all concerned about this is because it encourages independent actors who could strike with very little notice,” says Secretary of Homeland Security Jeh Johnson.

Police presence was increased at the Mall of America over the weekend, which is one of the nation's tp[ tourist destinations with over 40 million visitors in 2014.

The Mall of America was the only mall in the U.S. specifically named during the video.  West Edmonton Mall in Canada and London's Oxford Street were also named potential targets.