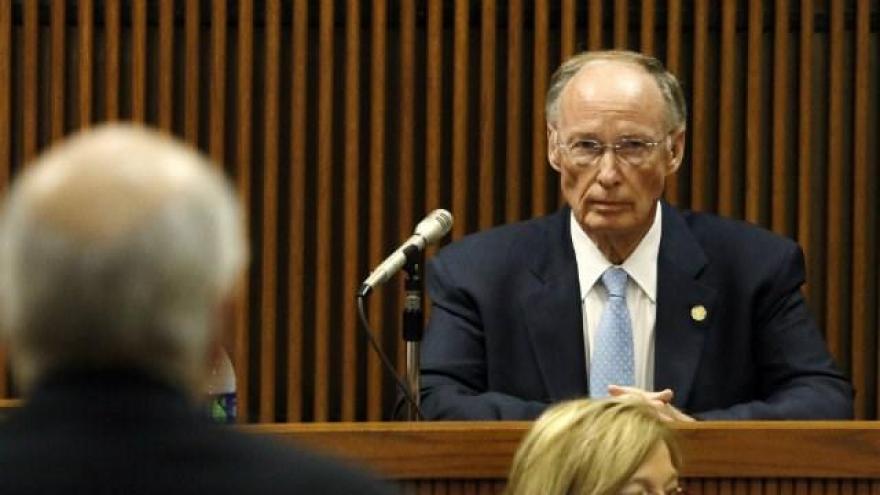 The 130-page document details a months-long impeachment investigation into Bentley's actions and says he was desperate to keep news of the affair from spreading beyond the Governor's Mansion, where it was apparently common knowledge among staffers.

The report by Jack Sharman, special counsel to the state's House Judiciary Committee, paints a portrait of a dysfunctional executive branch plagued by the affair of a Nixonian governor whose "loyalty shifted from the State of Alabama to himself."

To keep his relationship with Mason under wraps, "Governor Bentley encouraged an atmosphere of intimidation," it says.

The report's investigation involved interviews with more than 20 witnesses and a review of 10,000 pages of documents. Neither Bentley nor Mason assisted "in any meaningful sense," it says.

Time and again, the report addresses Bentley's refusal to cooperate with the investigation led by Sharman. It repeatedly expresses that the embattled two-term governor's obstruction is itself grounds for impeachment.

The order derailed a tentative impeachment schedule released by Sharman last week and gave Bentley 10 days to respond to the committee's report.

But on Saturday the Alabama Supreme Court halted the order, putting the impeachment hearings back on track to proceed as originally planned Monday morning.

"We appreciate the Court's consideration of this serious case and are gratified by the result," the governor's attorney, Ross Garber, told CNN. "The Rule of Law applies. Even in impeachments. Even to the Alabama legislature."

House Judiciary Committee Chairman Mike Jones said in a statement Friday, "We have filed a notice of appeal seeking expedited action from the Alabama Supreme Court to overturn this order." He said the committee will still meet Monday to discuss Friday's events.

Bentley has denied misusing state resources and said his relationship with Mason was not physical.

"I have done nothing illegal," Bentley said Friday. "If the people want to know if I misused state resources, the answer is simply no, I have not."

The report outlines the inception and cultivation of Bentley's relationship with Mason, from the time she attended a Sunday school class he taught at First Baptist Church Tuscaloosa. Bentley's first campaign for the governor's office hired her as press secretary.

Mason became the Director of Communications after Bentley's inauguration.

First lady Dianne Bentley's suspicions about Mason developed in late 2013 when she and members of her staff began noticing the governor and his communications director becoming closer, the report says. Bentley's behavior toward his wife of almost 50 years had changed, and the affection that had been so prevalent had nearly disappeared.

"If Governor Bentley meant to hide his affair from his wife," the report said, "he did not do it well."

The first lady first confronted her husband about the relationship in January 2014, but Bentley denied any impropriety.

The report goes on to chronicle the mounting suspicions of Dianne Bentley, who filed for divorce in 2015, and those of her staff and the governor's staff as affections between the governor and Mason were increasingly displayed in full view.

To the staff, the report says, "Governor Bentley's relationship with Mason was taking center stage in his Administration and that he intended to suppress speculation and discussion about the relationship."

The report cites multiple witnesses who said the relationship began to affect Bentley's decisions, as he delegated more and more policy decisions to Mason.

Neither Mason nor her attorney immediately responded Saturday to CNN's requests for comment.

Gov. Bentley also reportedly became fixated on suppressing phone-call recordings that purported to capture him telling Mason he loved her and enjoyed fondling her breasts.

The recordings emerged last year and were originally published by media outlet AL.com. Afterward, both Bentley and Mason denied having a physical affair with each other.

Sharman's report says that Dianne Bentley made the recordings after her chief of staff, Heather Hannah, taught her how to use her cellphone to record audio. The recordings in question were made in March 2014, during a trip to the Bentleys' beach house.

After Governor Bentley learned of the recordings, he "became obsessed with the existence of the tapes and a desire to prevent them from becoming public," the report says.

Citing Hannah's testimony, the report says Bentley threatened Hannah, who he believed was responsible for the recordings. "You will never work in the State of Alabama again if you tell anyone about this," Bentley allegedly told her in the kitchen of the Governor's Mansion.

In a deposition to the Alabama Ethics Commission in June 2016, Hannah said someone had vandalized her car, scratching "Bitch Die," into the driver side window and "You will f**king die" on the windshield.

Days later, as she was getting ready for bed, she said someone threw a rock through the window of her home. According to the report, Hannah said she believed the vandalism was because of her testimony to the Ethics Commission.

The report states the governor's knowledge of the recordings led to him using his influence over law enforcement to direct officers to control the fallout surrounding him and Mason, even as he continued the affair.

One of the officers instrumental to exercising Bentley's orders was the head of his security detail and Chief of the Dignitary Protection Unit, Ray Lewis.

Lewis told investigators that even after Mason left the governor's office to work for Bentley's re-election campaign, Bentley insisted that she be able to travel with him on state planes and in state vehicles.

"Lewis says he told Governor Bentley several times of the need to keep Mason's movements separate from Governor Bentley's official movements," the report says, "and that he could not provide security services to non-state personnel." Still, Bentley would often ignore Lewis' requests and take Mason along.

Flight logs from these trips, reviewed for the investigation, do not list Mason as a companion to the governor, the report says.

But when they confronted Bentley on a drive to Greenville about the affair and tried without success to get him to break things off with Mason, their relationships "deteriorated to the point of enmity."

Collier warned Bentley that he would be breaking the law if he used state resources or campaign funds to further his relationship with Mason, but Bentley denied any wrongdoing.

Evidence of a cover-up?

According to the report, around the time of Bentley's election to his second-term in 2014, he began to use state law enforcement to search for the recordings. He repeatedly directed Lewis and Collier and others to investigate and track down the recordings by questioning and intimidating Heather Hannah and Linda Adams, Bentley's scheduler, the report said.

Lewis testified that Bentley asked him to break off the relationship with Mason on the governor's behalf on two separate occasions, but the governor never followed through.

Bentley also asked Lewis to retrieve the recordings from his son Paul --- who the governor believed had them --- and to "investigate who had a copy of the recordings and identify potential crimes with which they could be charged."

Collier secured special agents from the State Bureau of Investigations (SBI) who would conduct private investigations for the governor. One of the agents, Scott Lee, said he was uncomfortable with Bentley and Collier's requests.

"The objective, he felt, was not to solve a crime, but to determine who had the tapes," the report says.

Collier was fired in March 2016. He says it happened after he refused to obey Bentley's order that he not cooperate with the Attorney General's investigation into ethics violations by House Speaker Mike Hubbard.

Bentley publicly accused Collier of misuse of state funds. The report notes that an investigation by the Attorney General's office cleared Collier of the governor's accusations.

Shortly after his termination, Collier met with reporters and told them he'd seen evidence of Bentley's affair with Mason and accused the governor of using state resources to cover it up.

But Bentley continues to deny any wrongdoing in public comments.