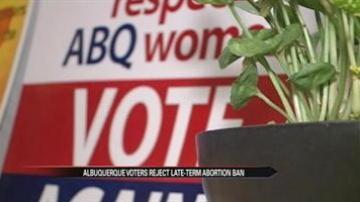 ALBUQUERQUE, N.M. -- Voters in Albuquerque rejected a ban on abortions after 20-weeks.

Tuesday's vote was a big win for pro-choice advocates. They say the ban was about protecting the unborn child from feeling the pain of an abortion.

The vote ultimately came down to one word choice.

"It's really important for women to have control over their own bodies," said pro-choice advocate Julie Wilt.

Just to get the vote on the ballot pro-life supporters got more than 27,000 signatures on a petition.

They say they are just glad the conversation is at least started.