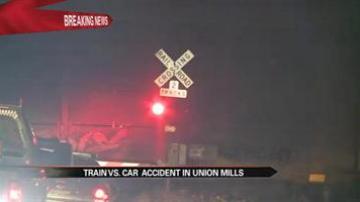 LAPORTE COUNTY, Ind. -- A La Porte man was killed when his Dodge Caravan was hit by a train near Union Mills.

The man has been identified as 40-year-old Brian D. Massengill of LaPorte.

The crash happened near State Road 39 and south of US Highway 6 around 3 a.m. Thursday.

There are barricades in place. Officers investigating said the victim drove around two of them and became stuck on the crossing.

The train was traveling at approximately 45 miles per hour at the time.

Officers said the lights and crossing arms at the crossing were working properly.

The sheriff's office reports alcohol was a factor in the crash and his BAC was .393.